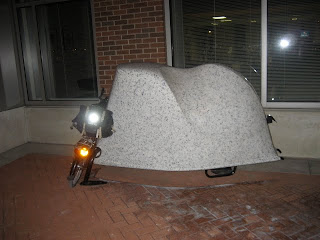 I've seen these futuristic pods a couple of times as I ride by, and have never bothered to stop and get a picture.  They're covered bike parking outside the offices of Livable Streets Alliance.
I had actually forgotten about the Livable Streets talk, but saw a crowd of people, and someone trying the pod, so I decided to stop, and blew off my grocery run to go and hear the lecture about Human Centered design.
The pod in use-  I tried lifting it up and it's lightweight, and I think it has some kind of counterweight system that makes it easy to lift with one hand, while you move your bike into position. 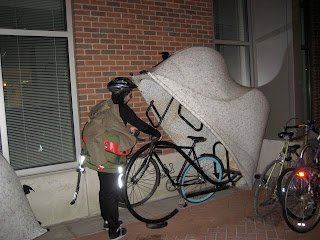 Some of the cool bikes in a packed bike rack (we had filled up all the racks and all the nearby meters and street signs). 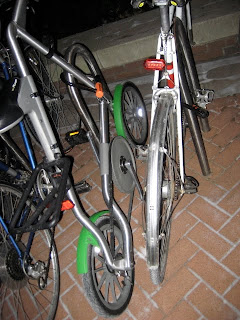 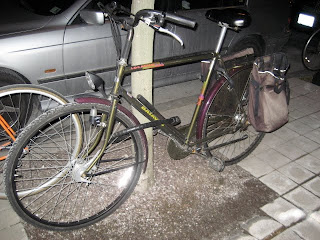 I didn't realize until I posted the picture that the Batavus had an olive frame and maroon fenders. Pretty slick
The talk was not bicycle specific, but was full of interesting pictures of people moving on all kinds of wheels through all kinds of urban spaces.  She had a lot of photos of South American public spaces, which is something that doesn't get seen a lot in planning and design magazines- there's much more focus on American and European public spaces.  The talk was thought provoking,  despite, or perhaps because she didn't have a real agenda or point to make- it was more about presenting data on all kinds of different ways for urban interaction to take place.
Posted by cycler at 10:37 PM