A very enjoyable part of my trip west was getting to visit my brother, sister-in-law and my cute as a button nephew.
Just before I visited, my brother's next door neighbor threw out two bikes that the previous owner of the house had abandoned, and he scooped them up from the alley.
One frame just needed new tires and cables and he fixed it up for his wife as a cruiser around town.  It has a really cool bell. 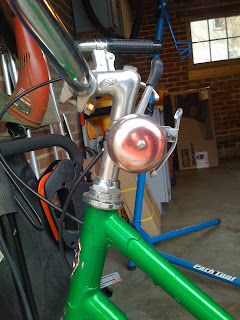 The other he wasn't sure what to do with.  He already has a mountain bike, a road bike and a round town fixie that he commutes on (I guess bike geekiness runs in families)  and he doesn't really need a 40 pound no- name 1970's Japanese touring bike. 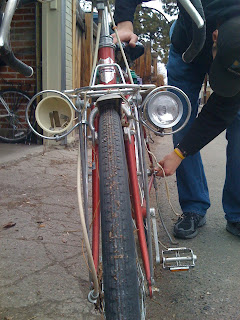 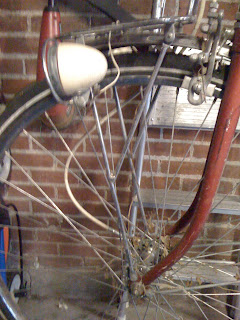 As soon as I saw the rack with its two light fixture "eyes"  I began to salivate, then to beg.  He was generous enough to let me have them. 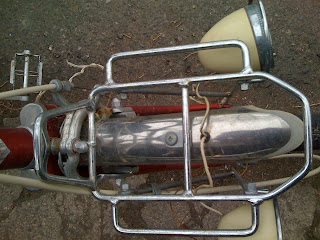 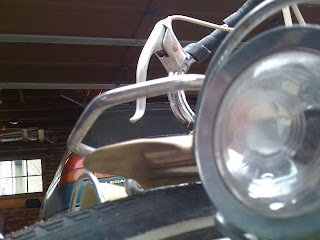 I didn't get great pictures, but the rack has chromed rings which support a bakelite "eggcup" with contacts in it for a bulb.  One of the lenses and the cool threaded aluminum retention ring is missing, so I'll have to do some searching for  something that I can use as a replacement.
They were powered by a bottle generator.  So I could try to find replacement bulbs that will work, or retrofit something (LED?) into the existing cups.
The fork had threaded rack specific eyelets (separate from the fender eyelets),  and the rotational stability was provided with an anchor through the front fender.  It will take some fabrication to get it to work on my bike, but I can't wait to see it in place.
Posted by cycler at 7:31 PM