Hot off the presses

Just got home from the Boston Bicycle Safety Summit.
There was a huge and vocal crowd, lots of good ideas, a few rants, a couple of ramblers.  Your average public hearing.

My first takeaway is how incredibly quickly (two weeks-light speed in bureucratic terms) the heads (not just representatives) of all the major agencies (MassDot,  MBTA, BPD, Public,  Boston Department of Transportation, Boston Public Health and a guy who didn't say a word who I think was from public works) came out and spent 2 hours listening and being very open and responsive to the bicycling community.   The mayor was there for some of it,  and it is clear that he leaned on some people to be there, that this is important to him, personally.  The fact that Mayor Menino has become a bicyclist himself has had a HUGE impact on city policy.

My hands down, 1,000% absolute favorite moment of the entire evening-  when I had unlocked my bike and was waiting as the cross walk on Comm Ave, and realized that the guy next to me, with his Peugeot, in dress pants, shirt and shoes, was the MA Secretary of Transportation, Jeffery Mullan,  head of Mass DOT,   the guy who really controls the money, and therefore the policy in transportation infrastructure .  Ready to bike home.   Priceless! 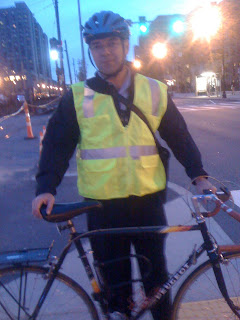 (we'll forgive that he didn't appear to have lights on his bike- the summit was supposed to end before dark, but the panellists graciously stayed around to hear everyone out.)
This drives home to me how critically important it is to get people on bikes.  When people try to bike, they realize not only how rewarding it can be, but what the challenges are.  Nothing makes the mayor or the head of the DOT understand safe passing on a visceral level, like being buzzed by a 2,000 pound vehicle going 35 mph.  People can start to identify with the gal on 2 wheels instead of seeing her just as an obstacle.   Once people understand things from a 2 wheel perspective, not only are they more likely to be humane towards fellow road users, they are so much more open to suggestions that reflect that perspective.
My thanks to the Mayor,  his tireless bicycle Czar Nichole Freedman (seriously- she must be related to the Energizer bunny) and all the folks who turned out on both sides of the podium for starting down the path that I hope will turn Boston into a wonderful place to ride!
Posted by cycler at 8:40 PM