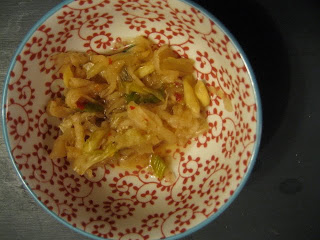 I've made no secret of my love of cabbage.
Or at least, I've tried not be be secretive of it.  Or at least it's an open secret?

Now I'm branching out to Kimchi, the Korean pickled cabbage dish.  I love Kimchi when I have Korean food, but I never remember to get it at the store, or they never seem to have it when I'm looking for it.

I did the hard part about two weeks ago. Let me rephrase that to put "hard" in quotes, because it was dead simple.   I read a bunch of recipes online, and gathered that it's not a terribly exact science, so I combined a couple of things that sounded good.  The only thing I would do differently is to salt the cabbage first separately, otherwise it bleeds off a lot of liquid that if your jars are full you have to decant.

I chopped up a Napa cabbage in big chunks.  Grated a Daikon radish with a cheese grater.  Chopped up some scallions that were wilting in the veggie drawer,  added an inch of ginger and a 3 cloves of garlic, 2 Tbs of red pepper flakes.  1/4 cup kosher Salt, soy sauce, a good squirt of soy sauce, a Tbs or so of the liquid that separates off of yogurt and a squirt of fish sauce.   Packed it into jars and left it on the counter for a couple of days.  Transfered it to the fridge and waited.

The other night I was digging around for dinner ideas, and I opened up the jar and tasted it.

Salty, spicy, crunchy, YUM.  More please!
I had to hold myself back from finishing the whole pint jar I opened up in one sitting.  I should have made more.  Fortunately now that I know how easy it is to make, I can whip up a new batch any time. Which might have to be tomorrow.  After all it takes a week or so, and I don't think this batch will last that long. 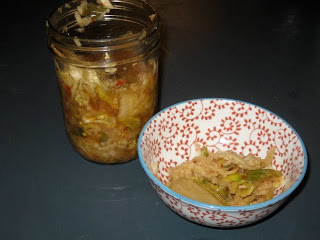