Riding in your work clothes

It was much cooler today, although still warm enough to wear my Architect shoes: a pair of Rem-Koolhaas designed Mobius shoes.  I'm going to blog a picture of them without my foot in them because I'm too shy to put a picture of my ratty toenails up on the internet.  The footbed, sole and heel wrap around in a continuous loop- hence the name. 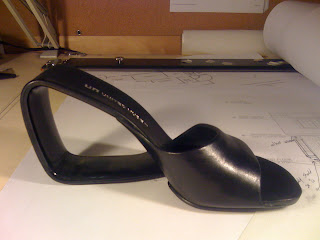 They were surprisingly excellent biking shoes.  I've had problems sometimes when biking in flat bottomed shoes that my foot creeps forward until my arch is over the pedal instead of the ball of my foot.
These, partly because of rubberized soles, had no problem with that.  They were also incredibly stiff and very efficient feeling.
Anyway,  what I wanted to blog about was as I was riding up Cambridge street, I was waiting in traffic, instead of lane splitting my way up to the head of the queue.
A biker came up and instead of passing me, stopped and waited just behind me, which is a little uncommon.   Just because I think it's rude to cut in line, doesn't mean I have hopes of getting others to share my view.  He followed me for a couple of blocks, through a tricky bit of vehicular cycling (passing right turning cars on the left etc).  I was a bit surprised that he hadn't passed me, but was riding aggressively enough to do the VC stuff.  We ended up stopped at the light at the top of Government center, and I struck up a conversation about the flower beds there.  About a minute in, I realized he was wearing a clerical collar, and I asked where he was biking to.  He was going to work at St. Paul's Cathedral.   I tried to take a picture, but unfortunately the light changed, and we had to hop up on the median.  He was reasonably gracious about it (what was he going to do- curse at me?)  but I think he thought I was taking his picture for the novelty "Priests on bikes!" 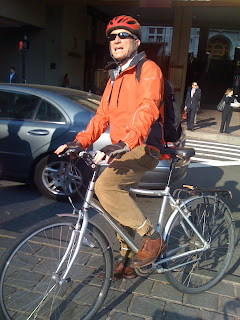 But mainly I wanted to show, as I always do, that its possible to bike in the clothes you work in.
Unfortunately the picture doesn't show his collar- you'll have to take my word for it.  But he was gone before I could check the photo.
Posted by cycler at 6:42 PM

Labels: fashion, Seen from the saddle