Things I did today

Got up,  read a couple of chapters of American Gods by Neil Gaiman.  I can't believe I've never heard of this book,  it's fantastic, was up waaaay too late reading it last night, and now that the Scientist has picked it up, there may be a tussle about who gets to read it tonight.

Went to the grocery store,  in the Scientist's car  because there were bags of dog food and lots of other bulky-heavy dry goods that needed replenishing.

Had a picnic lunch with the Scientist of "clean out the fridge" bruschetta and some yummy dutch cheese.

Made blueberry preserves (haven't done any canning since the flood).  We had a lot of blueberries that weren't really spoiled, but a bit dessicated and unattractive.  Added cardamom and ginger. Yum.  It's almost not worth canning 2 jars-  we could probably use them up before they spoiled if they were stored in the fridge,  except for the fact that there's already fig conserve, and strawberry jam, and apple butter open.

Put dinner in the crockpot.

Spent 4 hours finishing up one room of the basement cork floor.

Bought not one, but TWO 70 year old bicycles.


Yes, yes I know,  it's totally crazy and unexpected,  but I think that the 1938 Lady Tourist may be the bike of my dreams.  When we got them home, I had to take her for another ride around the block,  and then another block- might have kept going except for not having lights.
Much more to come, but for now here's a teaser photo.  (please note the lovely cork floor too!) 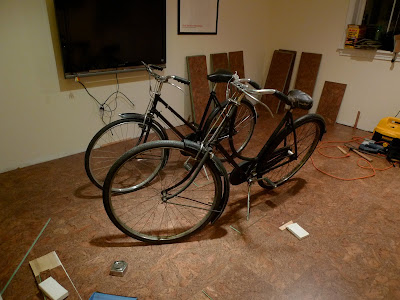