As expected, it was a long day, and my bus back from  the Cape arrived at  South Station about 8pm.  Despite my tiredness, this bike’s color scheme stopped me in my tracks, (and by the tracks) and I had to get a picture.. 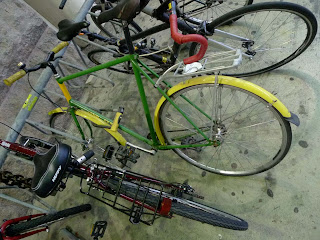 At first I was  just drawn to the cheerful color scheme, and I was puzzled by the cryptic lettering that was peeling from the downtube.  Was it a name tag?  You’d think with a bike this distinctive, you wouldn’t need to put your name on it!  And what kind of name is Eer anyway? 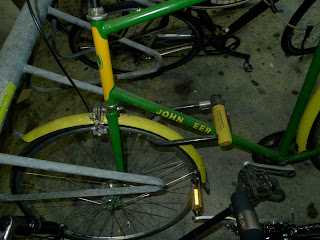 It was only when I came around to the headbadge, that it all became clear to me. 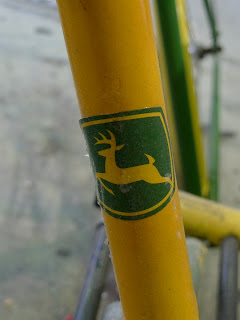 Evidently John Deere not only  brands a line of adult cruiser bikes, But John Deere also sold bicycles, in the 1890's and again in the 70's. and it sounds like they're a collector's rarity.  The Scientist thinks this is a real one, but I'm pretty convinced that it's a DIY.
Maybe it's because I like the whimsy of DIY better than a corporate branded bike made in China. I love how people can take a stock frame and create unique bikes by customizing the color and details. 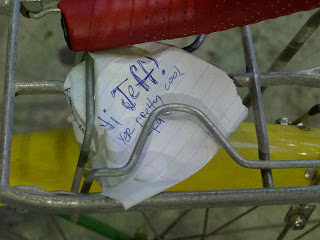 The note shoved under the jaw of the plechner rack is a bit of found whimsy too.
Posted by cycler at 9:09 PM