Although it wasn't my intention I ended up riding 20+ miles today kind of without even trying,  all unfortunately during the hottest part of the day, on a very hot (97 degree) day.

My day started early with a 7am meeting in the suburbs (via Zipcar, although I may look into taking the T in the future)  By the time I got back into the city at 10, it was probably in the mid 80's.  I took the bike path, and rode slowly and helmetless until I had to get back on the streets for the last miles through the city.

As I was shutting down at 3:30, I remembered that I had forgotten to mail in my architectural license renewal. The late fee is pretty steep, and they don't accept a "postmarked by" date.  More painfully, although the state office that manages such things is only a mile from my office, the form was at home, 6 miles from work. and they couldn't accept the fee without the paperwork.

So I rode home, picked up the papers,  changed into a floaty skirt (had worn pants to the jobsite in case I had to climb up on anything)  and headed back into the city.  Because I was a bit pressed for time, I took the shortcut  (5 miles) directly through the city,  but tried to ride as slowly as I felt comfortable doing in traffic.

Back to my office to pick up something I needed to work on tonight,  and then back to Cambridge,  by the river again so I could dawdle, and stop at Trader Joe's for some well deserved lemonaide.
The bike parked next to mine was secured in an interesting way: 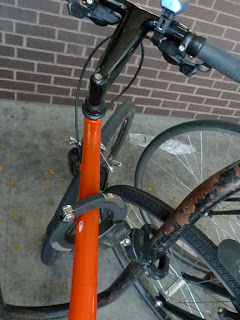 2 bottles of wine, a bottle of seltzer and a bottle of lemonaide in the pannier, I decided to stop and get a lobster at the funny little lobster pound stuck in a residential neighborhood.  I'd seen it on my way home f a couple of times, but never stopped.  It was nice, the lobsters were reasonably priced, and according to the owner, had been in the ocean 24 hours ago.  For my final errand, we had bought a new carpet for the basement floor, but it was a floor sample, and we couldn't have it until they changed the display today.  Rolled it up, and on the back of Gilbert it went!  Although it was only a couple of blocks, I thought it was too unwieldy, so I walked it home, and cracked open the lemonaide 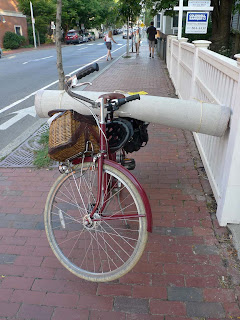