There's been a lot of back and forth in Boston advocacy circles about the importance of plowing bike lanes, and the  feeling that the general use of bike lanes as snow storage spaces is disrespectful at best and diabolical at worst.   I think the rhetoric has gotten a bit out of hand.

First of all, we're talking about WAY more snow than usual. It's not like we're talking about 6". I've read varying estimates from 43" to 60" and that was before this last storm that has given us 6" so far with the threat of another 12".  There really isn't anywhere to put the damn stuff.  My tiny front yard is piled to at least 3' and deeper in some places where I've been able to throw the stuff from the sidewalk over the fence.

Secondly, and I acknowledge the chicken and the egg element to this, but there just aren't that many bikers out in these conditions.  Even moderately hardcore riders (I'll count myself in this group, but just barely) aren't willing to go out and play bumper cars with SUV's in salty slush.  Fortunately Boston offers a lot of transit and walking options for getting around.   We'll start riding more when the roads are back to mostly dry pavement.

Thirdly,  they're using parking spots as storage too- it's not just the bike lane.  However, this has lead to some really entitled parking behavior.   It seems pretty obvious to me that if the parking spot is completely filled (with a car or with snow) it's not an available parking spot.   Unfortunately,  there are a lot of people who think that they have the right just to park in the travel lane adjacent to the parking spot.  On Broadway just off the Longfellow bridge- the road was narrowed to just one lane because of this, and I've seen it lots of other places too.  I know that the city put "no parking" signs up,  but I'm not sure if it's being enforced.  (sorry for the lousy pictures- the combo of camera phone and mercury vapor light is pretty awful)  See the light post? That's the curb.  Normally this is parking lane, bike lane, traffic lane.  The parking and bike lanes are completely full of 6' of snow. 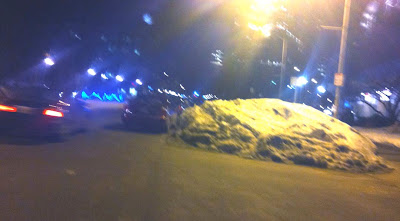 See the (ninja) biker who is about to run into the maroon car parked in the right lane?

I really hope that the city is ticketing the hell out of these people- maybe subsidize  some of the overtime snow plowing.  Yes, it's an inconvenience not to have those parking spots, but its a snow emergency, and we all have to live with some inconvenience.  Pedestrians have to deal with plowed over intersections,  bikers have to ride in the traffic lanes,  cars have to dig out after the plow goes by and be careful of bikers and pedestrians in the road.  If you can't find a parking spot, perhaps you should consider alternate transportation for the duration instead of adding to the traffic chaos by just deciding to park in the street.
Posted by cycler at 10:32 PM