Sorry for the lapse in posting,  we've started our kitchen renovation, and between taking care of last minute details and the entire first floor either being a construction zone or a storage space for all our kitchen stuff,  it's been tough to sit somewhere and blog.
Some vignettes from the week:

I did get to ride every day this week except for Tuesday.  Tuesday was a little nasty- spitting a "wintry mix" of rain and snow, but I mostly didn't ride because they started the demo, and I was doing some last minute packing,  talking to the contractor, and was running so late that I got a ride with the Scientist to the train.
Despite the wintry weather I saw 13!!! bikers between Harvard Sq and Kendall where he dropped me off.   And people say that "no one" bikes in the winter.  I want to take a video of all the people who still ride by my house, despite the bike lane being snow storage- it's not just the hardcore tech geared hardcore folks you might expect - lots of women, people dressed in "normal" clothes,  citizen cyclists getting where they need to go, and going by bike despite it being winter.

I went to a Livable Streets Advocacy Committee meeting on Monday,  and it was so nice to spend time with other people committed to public transit and active transportation.  It's really energizing to brainstorm with other advocates - getting excited about projects to try to make Cambridge and Boston even better places to bike.    A funny note- I rode from work to home, let the dog out and then hopped back on my bike to get to the meeting.  I was halfway there before I realized that I had forgotten my helmet at home.  I was super defensive riding through Central Square without it, but I think it was interesting that I'm so used to having it on, that I didn't really register not having it on.

One of the projects that the committee is working on that I think anyone could contribute to, is collecting information and photos of snow choked roads.  I know that a fair bit has melted already, but if you have photos of snow on bike lanes, pedestrian crossings etc,  you are invited to post them to a special flikr group here.  Although the reduction in facilities is sometimes annoying, it's an interesting experiment in what would happen if 1) lanes were narrower and corners were all necked out, 2) there was less parking.
Maybe if lanes were less than 10' the world wouldn't end- people would just go a bit slower and we would all be a little safer!

I'll close with a photo of the kitchen demo:  I had a client once who was starting a year long gut renovation of a historic house in an expensive neighborhood.  As he walked through the skeleton of the house that he'd recently paid a lot of money for, he said "it's hard to see how we're adding value here."   It's a bit tough to see right now, but hopefully it will all come out OK in the end! 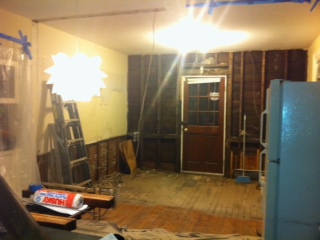