In which I accidentally commute in a Blizzard

It was all because of the parking sticker.

The Scientist is out of town, and his Cambridge resident parking sticker expired yesterday.  I tried to get it replaced yesterday, but the lines were ridiculous- close to 2 hours.   So I thought I could go extra early this morning, and wait out in front of the building until they opened.   Unfortunately the Cambridge City hall Annex, where they handle such things is a long walk from the T, a long walk from my house, and not terribly reachable by bus.  However, it's just a block from my normal bike route.

And yes, the forecast was for insane amounts of snow (another 18" after both storms are done!?!)  but the real snow wasn't supposed to start until the afternoon/ evening.   And it wasn't snowing when I left the house- a flake or two, but nothing serious,  so I decided to saddle up.

The ride to the parking office was fine-  it was starting to come down harder, but the roads were clear, and it's a short ride.  Amazingly they were open early, and the line wasn't really long, so I waited 20 minutes and emerged victorious- only to find that it had started to REALLY come down while I was inside.  visibility was poor, and there was an inch of snow already on the ground, with more coming fast.  It was also unusually cold,  the online weather said it was 17. 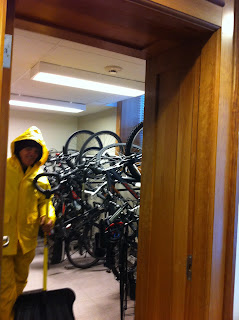 I had to ride to the T at least, so I got back on my regular route and decided I'd ride to MIT and decide then if it was better to ride or ditch the bike at the Scientist's office.   Despite the snow,  the ride was OK.  I went slow,  the cars all were going slow, and nobody hassled me. I had a couple of slippery moments, and had to put my feet down a couple of times for stability, but it was  OK, so I decided to ride all the way in.
It's a little tricky to leave things at MIT when the Scientist isn't there- the basement is card reader controlled, and I didn't get his card before he left, plus I was worried it would take longer to get to work that way (I was already a bit late).

Although it ended up being fine, and I think it was an interesting experience, I don't think I'll do it again.   For one thing, it was really hard to pay attention to traffic.  I was so busy concentrating on not wiping out, and avoiding hazards hidden under the snow that I wasn't as vigilant as I think is prudent when biking in downtown Boston traffic.  Also,  several times I saw cars sliding when they tried to stop, including one right in front of me.  I'd hate to think what would have happened if it were behind me (and this was a conservatively driven Volvo station wagon, not a daredevil cabbie).

Finally, although I was generally warm enough, in wool tights,  jersey dress, wool sweater and my red wool coat,  my gloves and my leather boots got pretty damp, and thence cold.  Despite an extra pair of wool socks inside my boots, my toes were freezing by the time I arrived.

Gilbert is resting comfortably, dripping onto an old cardboard box we keep in the office for this purpose.  He'll probably be stuck here for the rest of the week, but there are worse places for him to be.
Posted by cycler at 11:55 AM