I had a great time at Saturday's Ladies who Bike Brunch.   We went to Area 4 again, as it worked out so well last time.   We sat at the big communal table, and I think there were 12 people, although I think I lost count at some point as people trickled in :)  Was having too much fun chatting. 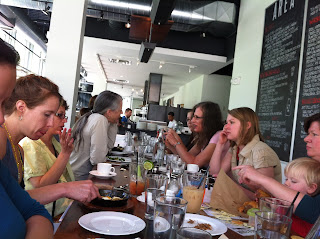 It was great to see some familiar faces and some new ones,  and as usual, the food was great.   I went straight to "lunch" instead of "brunch",  with one of their wood fired pies- YUM, and shared a basket of baked goodies with my neighbors. 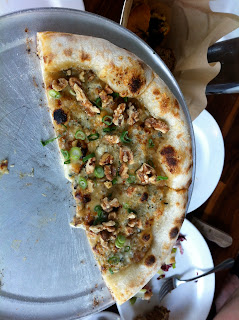 We milled around a bit afterwards, enjoying the wonderful warm weather,  and admiring Megan's bike- with "new"old chainguard.  Hers was the only bike parked close to the entrance- everyone else was either parked out at meters, or at the bike rack around the back of the building, so I didn't get photos of people on their bikes before everyone dispersed :( 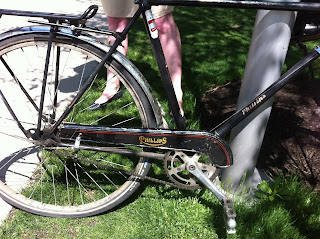 Next month we're going to try a Sunday instead of a Saturday,  so we'll be meeting on the 20th of May,  location TBD.  I'm thinking we should try somewhere on the Boston side of the river for the ladies coming from that direction, but I don't know as many brunch places "over there".  Any suggestions for a place that can handle a group and not freak out if we linger for more than an hour?   A picnic would be great, but I'd like to have a backup if it's not great weather.  We might also do an earlier time (9?10?)  to stay out of the busiest brunch rush.  Would love to hear suggestions!

Also, for a future meeting, would people would be interested in any sort of bike maintenance clinic?   I dropped by Hub Bikes after the brunch, and Emily was more than willing to do a short demo- I just couldn't say exactly what kind of demo people would like.   I thought at the next meeting we could chat about it.  It might also be nice to connect people to Hub bikes, as one of the constant complaints at these brunches and with women bikers in general is issues with male-centric bike shops.   While Boston has lots of options, and I've learned pretty quickly to vote with my feet if I'm not happy my treatment as a woman at a shop,  I think it would be great to connect our group with Emily's shop.