Livable Streets Alliance, and the Somerville and Cambridge Bicycle Committees are sponsoring a commute challenge where three commuters- one in a car, one on a bike and one using the T race from Redbones in Davis sq to Genzyme in Kendall.   It's a "door to door"  race, so walking to your parking or to the train, and finding a parking spot at the other end are included in your overall time.
My money is on the bike, but at least the person on the T can read while they wait or ride :) 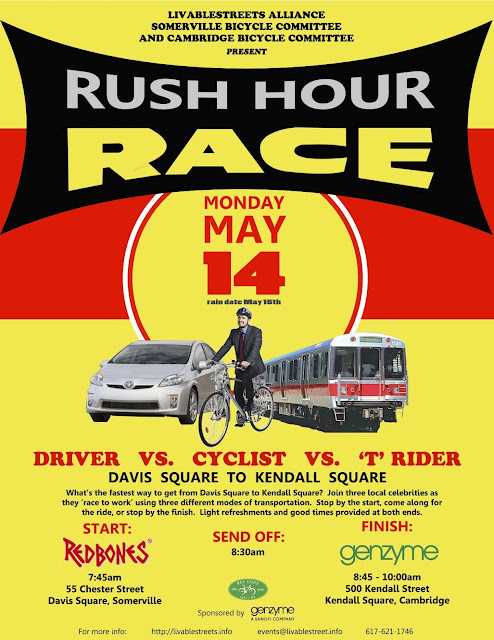 They've been doing this in NYC for many years, and the cyclist won for at least 10 years in a row. I know that the Scientist and I used to be neck and neck on our commute, but I know I'm a lot slower now that I don't filter.   If you can find a route that's all bike lanes, I suspect that the bike might well win though, especially since the parking time is negligible.   Who do you think will win? Do you think it's a fair "fight"?
UPDATE:   I hear a rumor that Josh from Bike Safe Boston has agreed to be the biker-  will he ride the Paper Bike?
Posted by cycler at 1:57 PM