It's been an up and down day.
The morning was fine, and I wore my leopard print pumps which always puts me in a good mood.
About halfway through my ride though, a  cab cut into the bike lane right into me- I was more or less even with his passenger door, and he was driving about the same speed as I was (I wasn't coming up along his side- he'd pulled up next to me) and I could see him starting to veer over.  I'm ringing my bell, and yelling,  and I stop as he's about 9" over the line and jump to the curb. I yell at him something like "what the hell are you doing"  and he shrugs, as if endangering my life was no big deal.  The thing that really pissed me off was the exiting passenger says in a scornful tone- "Get over it-  you were in his blind spot"
First of all, if I were in a "blind spot" it was because he had just passed me on his way into the bike lane.  Secondly, last time I checked, when you change lanes you have to check your blind spots for traffic.  I'm afraid I was beyond coherent argument at that point,  yelled an unladylike epithet, and biked off shaking.

A block or two later, I realize that the nut holding my front fender stay to the dropout had gone missing, and the stay was flapping in the wind.  I thought I had a 5mm nut in my bag (what, don't you?)  but I must have dumped it out by mistake. 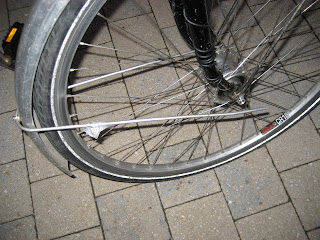 Unfortunately that puts me at 0 for 2 on fenders.   The back one went on Monday- cracked straight across.  The rear one is now in 3 pieces- the first joint is under a hastily crimped on fender bridge which has been holding unsteadily for 3 months now.  Since I was in a hurry (of course) when it broke,  I hobbled the rest of the way to my destination, fender listing and lurching.  When i got done with my meeting, I figured out a way to wedge it between parts of the rack. It's stable for now, but it's not going to do me a lot of good in the rain.  Talk about a funky fender line! 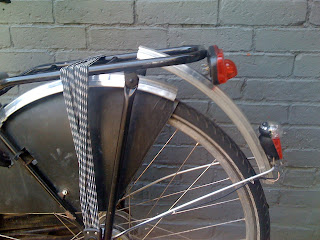 I keep deferring maintenance on Robert, thinking I'm about to take him apart and rebuild him.  Other than chain lube and a wash a month ago he's had no real attention.  Frustrating to feel like I'm on a broken down beater when everyone is out on their fresh spring rides!

On the other hand- I got the Albatross bars that I ordered from Rivendell, sooner than expected-  On the way home I had Albatrosses (Albatrossi?)  coming and going! 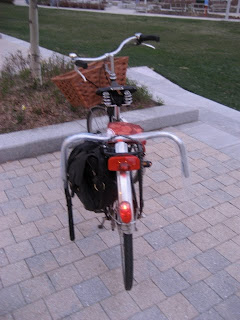 It was reasonably chilly this morning, but by this evening it was very warm- even hot! (81 degrees!)
One of the things I love about riding in the evening is the microcurrents of air- pockets of cold when you go past a garage entrance-  moist coolness when you pass a flower bed, followed by heat radiating from a stone wall,  and the metallic smell of hot manhole covers.  A wave of hyacinth's pungency, followed shortly after by manure from the horse carriages.     I really enjoyed my ride home in the warm twilight, and saw probably 50 other riders.  After months of feeling like the only one (crazy enough to be) on the road,  it's nice to have some company,  even if it results in the occasional traffic jam.
Posted by cycler at 8:42 PM