This morning the Scientist headed off to Bermuda for a field research trip, and I headed to the Dentist.  No,  life is not fair. 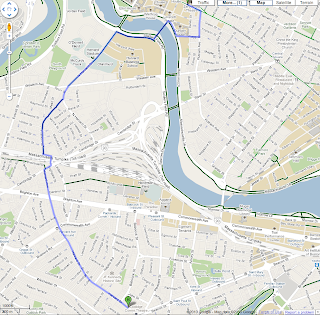 My new dentist is in Coolidge Corner Brookline,  which is a tough ride through Brighton/ Allston from my house.  It’s not that far, it’s just that a) traffic is pretty bad along the arterials in that part of town b) to keep people from cutting through the neighborhoods, the side streets are all one ways to keep you out, and c) the arterials are lined with parked cars and the occasional double parked delivery vehicle.  Add a busy bus line, a couple of train tracks and an intersection where two bikers have been killed,  and I was not looking forward to it.
To make matters worse,  I took Robert apart this weekend and started putting his parts on the new bike frame.  I’m about 1/3 done, which means that I’ll be riding Minerva probably the rest of the week.  While Minerva is lovely to look at and a pleasure to ride,  I’m still not as completely comfortable with the gearing and the braking as I’d like to be riding in tough traffic.  I was planning on biking mostly on the bike path this week to compensate.
I left super early, partly in hopes that I would miss the worst traffic, and also to allow time if I needed to detour or otherwise re-evaluate.   And….. It wasn’t bad.
I did become a pedestrian to make the left turn at the intersection where two bikers have been killed.  People run the light, and jackrabbit their left turns, and I just didn’t feel comfortable hanging out in the middle of the intersection with my left hand hanging out, waiting for a break in traffic. After that hitch, things went surprisingly smoothly, and there were even some of the new bike lanes along Harvard street.  Evidently they were just painted.  Like over the weekend.
I pulled up a few blocks short of my destination,  30 minutes early, and decided to grab a coffee- only to realize that I didn’t have a lock!  My normal lock was in a pile with the rest of Robert’s accessories in the basement.  There wasn’t time to go back and at 8AM the chances of finding a lock for sale in the neighborhood were nil.
So I headed to the dentist’s office, found a secluded location back in a corner of a parking garage, tucked Minerva behind a jersey barrier, and went up to the office.  I told the receptionist that I was worried about it,  and she said- bring it on up- we have people do that all the time!  I knew I liked this dentist!
When I brought Minerva up, and she realized how big she is, the receptionist balked a little,  and we ended up putting her in a unused corridor that leads to the emergency exit stairs.
An hour later, I emerged, teeth clean and shiny, to find Minerva waiting for me.  Biking in Boston isn't so bad!
Posted by cycler at 6:23 PM