Robert goes to the game 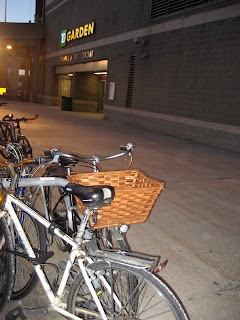 Through the generosity of a friend with season tickets,  the Scientist and I went to a Celtics game last night.  (they lost in overtime- it was tough, but a good game- Houston is a scrappy team)
Since it's near my office, I just stayed a bit late and went directly there.  The Scientist was going to meet me there by bike, but it didn't work out and he ended up parking a long way away and walking there.

I've found that biking to a game (Celtics or Red Sox) is by far the best way to get there.  Both of the stadia for these teams are famously in the middle of the city, where there is no parking, and even though they run extra trains when the game gets out, the T is always a zoo afterwards.  Driving is a nightmare- you either pay $$$ to park nearby and inch along in a traffic jam before and after, or you pay$ and walk a long way before and after.

It's great after the game to unlock steps from the exit door and zip along past stopped cars.  The Scientist and I left the Garden at the same time, and we got home at almost exactly the same time (he passed me a block before we got home, but he had to hunt for a place to park, while I could roll up to the front door).


This makes me think about the "third leg" (or is it third rail) of bicycling promotion- auto parking!
People always talk about the chicken and the egg of biking-  if we get more people biking, they'll increase safety by making drivers aware and demand more infrastructure, vs if we build more infrastructure for bikes, people will be safer and more people will ride.  The Third Way so to speak,  is to make parking and driving a car a pain in the a$$.  The reason so many people bike to my office is that there's no place to park, and biking is more flexible and convenient than the T.    In Boston and other dense cities, it's often easier to get around by bike, partly because of traffic, and partly because "there's nowhere to park".  Most places (even a lot of the suburbs)  are dense enough that you do most of your everyday errands within 2 miles of your house, which makes biking ideal.
Unfortunately taking parking away is a sure way to incense drivers.  Its tough to take a fantastic "free" amenity (as in people don't have to pay the external costs of parking and roads) and make life "harder" in order to make bicycling more appealing.    I know that once there's a robust bike culture it's easier as I see that in Portland OR,  there's a big movement to turn car parking spots into on-street bike "corrals". While it would be great if we could encourage denser development so that every place would be like Boston- I'm not going to hold my breath.
Posted by cycler at 5:22 PM