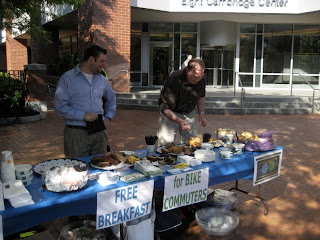 Thursday I went to the Kendall area bike breakfast,  which is organized by Jim, a very personable fellow who runs  Charles River Transportation Management.  They have a really interesting niche providing shuttles, vanpool, carpool, and largely corporate sponsored "last mile" transportation.  They will take you from the T to your office in East Cambridge, the Cambridgeside mall, etc.  One of the things that they do that I think is neat is that they offer "emergency transportation" plans.  If your employer subscribes, and you have to work too late for regular public transportation, you get sick during the day,  your kid gets sick and has to be picked up from school etc,  they will provide a cab to get you where you're going as a way of encouraging you to bike/ walk/ T  the rest of the time.

Anyway, it was well attended, since it was a lovely day and it's right on the broadway corridor that feeds people over the bridge into Boston. 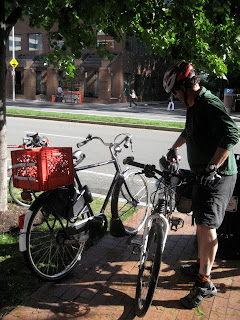 I met the owner of this lovely Gazelle dutch bike.  I'm so bad with names, but I think his name was Olaf  (apologies if I got that wrong!),  and he works in the Kendall sq area.  He and I had exchanged pleasantries at a light on Monday,  almost missed the light because we were so busy chatting- it was nice to have a chance to talk to him after traffic.  It turns out we both had the same source for 28" tires, although he was telling me about some fantastic Schwalbe tires that have a "slime" layer and are even more puncture resistant than the marathons. 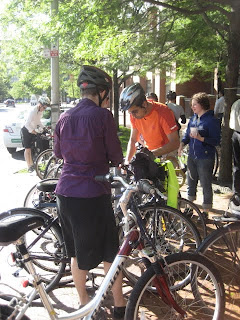 There was a lot of spandex and neon colors,  but I did see a couple of people dressed for work in the crowd.

I did feel a little uncomfortable when I was unlocking minerva and some people pulled up and actually pointed at me and said something about my shoes (my new favorite red heels).  It's a bit awkward to be thought of as strange or odd, when I feel so normal riding like this.  And didn't their mothers teach them that pointing was rude?
Posted by cycler at 7:12 PM