Was wandering around the South End Saturday when we stumbled across a Victoriana festival.  The South End of Boston is the largest extant collection of Victorian brick rowhouses in the country,  and according to a sign, they had put a reproduction iron fence in at this park and were having a fence dedication and Victorian festival.  There were lots of elegant gentlemen and ladies in period costume,  a small orchestra playing classical music,  and wholesome games and activities. 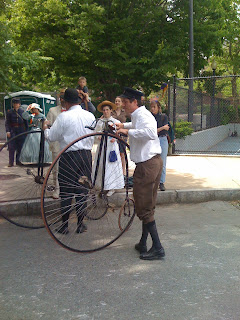 And, most importantly they had Penny Farthing bikes!  We had been wandering towards the music, but from a block away I saw the penny farthings, and dragged my companions over.  They were actually giving (assisted) rides!! 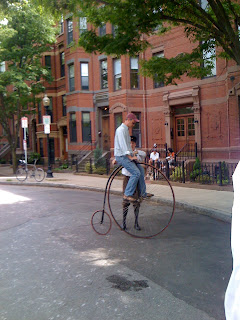 but alas,  I was wearing a pencil skirt which is fine on my loop frame, but wasn't going to work with these bikes- I tried, and was so so sad that I couldn't try them. 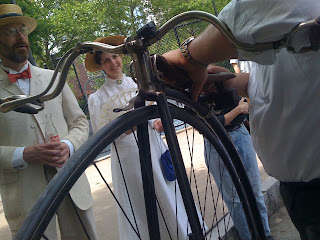 These bikes are really fabulous- unfortunately I didn't have a real camera, and I don't think the iphone camera does them justice.  I had a great conversation with Dave Toppin, who seemed to be running things, and who was a font of knowledge.

His bike is a Rudge (yes, they're that old) 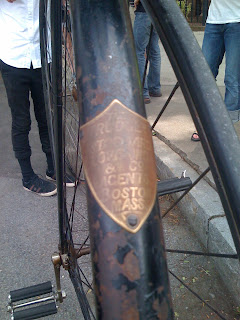 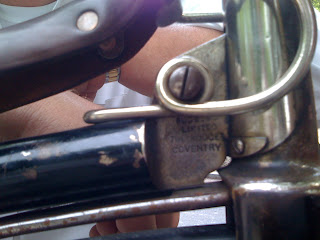 The tires are solid rubber,  and you have to have a special machine to put them on.  All the parts are nickel plated which gives them a lovely golden glow. 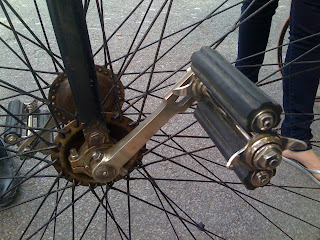 The system is direct drive- the original fixed gear- that's why the wheel has to be so big- you don't have any mechanical advantage provided by gears and such.
There were a couple of kids riding them around with great expertise (pulling wheelies) - they looked like they were having a blast. 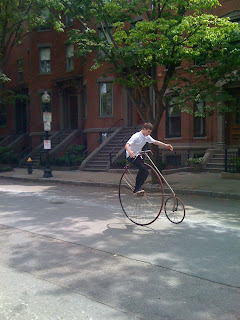 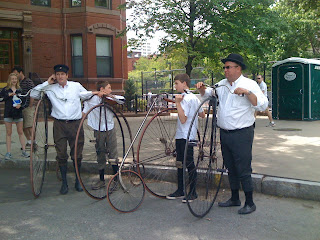