Today was the Swiss consulate sponsored "dress up" ride,  which unfortunately was not very well attended, largely because it wasn't terribly well promoted.
They had fantastic food though,  including Pretzel Buns,  which I may have to figure out how to make myself, and a really neat "Fruit slaw."  The "slaw"  was grated apples,  blueberries and strawberries,  with whole milk yogurt and topped with sunflower seeds.  It was surprisingly great- crunchy, sweet, tart- like Museli without the grains.

I met up with the woman  (Karen?  Carla?- I've got to start writing this down) who had told me about the bike cages at South Station on Wednesday.  Today she was riding this awesome chopper bike, which I belatedly think is this bike.  It's so incredibly cool to meet the people behind the bikes I stop and admire on the street! 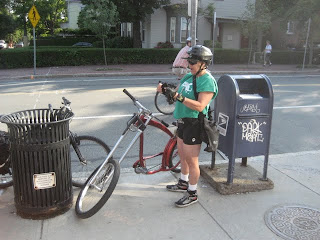 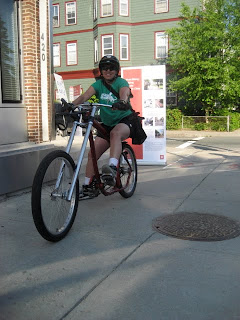 Two others that I have run into at events and on the road before: 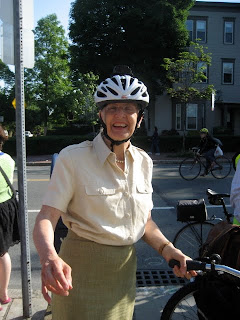 This elegant lady is  Renata von Tscharner,  an architect, urban planner and the founder of the Charles River Conservancy.  She had a fantastic tweed skirt that would be perfect for the tweed ride, and had a  lovely green and gold jacket, that she folded neatly and put into the milkcrate on her rack. 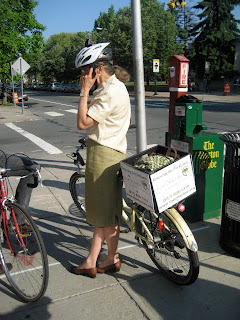 And this gentleman, who is a lawyer  (Jeff I think?- man I gotta start writing things down) who I see fairly often on my morning commute.
I unfortunately didn't get a picture of his really cool leather satchel.  He had been to the lecture I missed last night, and we talked about that along the bridge. I'm going to have to find a video of that talk, because it sounded fascinating.
Renata was kind enough to take my picture to show off my black and white dress (someone asked me if I picked the dress to match the bike ) 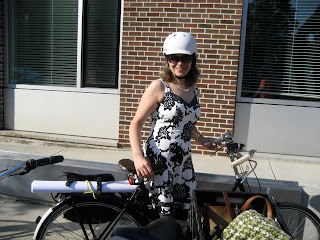 Because we were such a small group, I successfully advocated for us to leave at 8AM instead of 8:15 so that I had about 5 minutes at the bike rally on City Hall Plaza without being completely late to work.
Part of our convoy (and a randomly passing biker with a great pink bike and what I think might have been a dotted swiss dress). 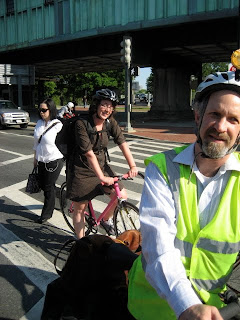 About halfway up Cambridge Street- we met up with Cris- who has an amazing ANT bike, that I know I've drooled over and photographed, but I don't think I've ever posted.  I saw him have a scary crash once on this bike,  and we seem to keep the same hours, because in the winter we see each other a lot on the homeward commute.  He has the coolest cycling knickers,  and is going to miss the tweed ride because he's going bike camping in the Berksheres.  Apologies for the flag appearing to grow out of his head- I was snapshotting, not taking composed pictures. 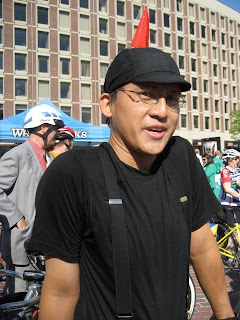 We were chatting about his dual E6 Ant bike rack.  I wished I had Gilbert so they could have a group portrait. 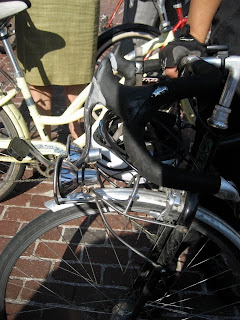 There was so much going on at the City hall plaza, but I didn't have time to see any of it, unfortunately.
There were lots of people listening to speakers- evidently the inclusion of bike lanes into the long planned redo of Mass Ave was announced there.  WHOO HOO!  That's a major victory that a lot of people have fought a long time for. 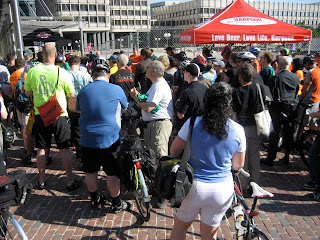 There was also another dog in a trailer!  What are the chances that I see two in two weeks! 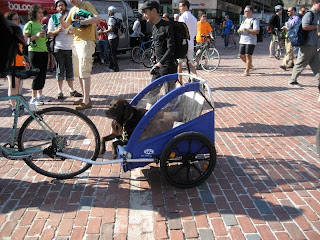 He was very chill- my dog would be all over the place.  I guess Labs are that way.  He's got a sweet ride.
I guess it's not just in Cambridge after all.
Boy, I was exhausted before I even got to work, but it was sure fun to meet so many people and talk about bikes and how much we love them.
Posted by cycler at 7:54 PM