Didn't know my own strength

As is common on a new bike, things slip, cables stretch, and there's a fair bit of tweaking and tightening that goes on in the first couple of rides.  To that end I've been traveling with essentially a full set of metric wrenches 8--14mm, a set of allen keys, and a small crescent wrench everywhere I go this week.  I noticed that my rear brake lever was getting pretty spongey, and while it was still slowing the bike, it was bottoming out when I pulled hard on it.  So first I adjusted the little barrel, which on a nexus rollerbrake is at the back near the pull arm.  But pretty quickly I had maxed that out, so I needed to move the fixing bolt at the end.

If you're unfamiliar with roller brakes, there's a bolt at the end of the cable which fits into the pull arm, that's tightened hard on the cable and sets the effective length of the cable.  So in the lobby of my office, I unscrewed the bolt, moved it a little closer to the front of the bike (shorter cable)  and tightened it down pretty good (I thought).  But the first experimental squeeze of the brakes went to zero as the cable pulled through.
So I adjusted it to the shorter position again, and decided I'd really tighten that mofo down.  It wasn't going to slip again on me!  I hit on the idea of tightening it IN the pull arm, because the arm is slotted in such a way that I could use it as a wrench to keep one half from moving, while I tightened down on the bolt.
A couple of good pulls with the 10mm wrench when all of a sudden, no more resistance (not a good sign!)
I'd pulled the bolt into two pieces.  I wouldn't have thought it was possible!  Guess I didn't know my own strength! 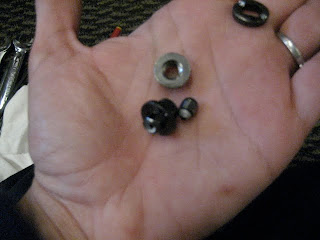 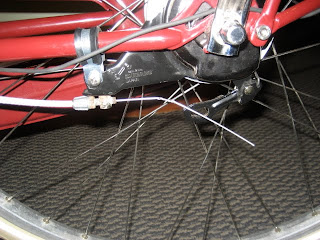 This of course meant I had no rear brake.  I know fixie riders do it all the time, but I couldn't stop with my chain either! I biked towards home,  trying to balance speed to get to a bike store before closing, and not so much speed that I couldn't panic stop with just the front brake without doing an endo.
I made it just before closing, and the nice folks at Cambridge Bicycle were kind enough to search through their odds and ends for a fixing bolt, with no luck.  I've got to say,  I used to be intimidated to go in there because it's such a hipster fixie scene, and I feel like such a square fuddy duddy in my work clothes and lack of tatoos,  but everyone I've interacted with there has been super pleasant and helpful.
I think they were all ogling Gilbert while I was talking to the guy searching for the part.
So I continued on my way home through  the live action video game of Central square with trepidation,  but got home safe.
After rummaging around in my own store of odd parts, I found a cable fixing bolt of a sort, (basically a bolt with a hole perpendicular to the shaft- through which the brake cable passes) that I managed to rig up with some washers for compession and a nut through the pull arm in a way that seems like it will work. 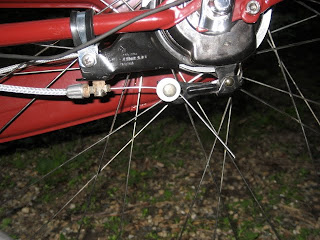 I'm a bit worried that it will pull through with a good hard yank on the brakes, but it can't be any worse than what I've got without it.
The moral of the story is:  Never throw any old bike parts away- you never know when they can be re-purposed somehow!
Posted by cycler at 8:03 PM