Only if you love it

I went to the Livable streets talk- I was a little late, but I think I caught most of it.  I'm so glad I went, because even if the whole talk had been a bust, I found this on the way home: 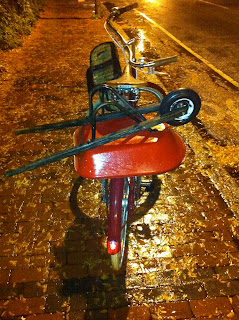 It's the PERFECT size for my 2 YO nephew- he will be SO excited!  It was a bit of an awkward fit on the back of the bike, but less awkward than wheeling it along.  I'm tempted to drag it to the post office tomorrow, but I suspect it will have more impact as a Christmas present.

The talk was not a dud in any case, so the wheelbarrow was just a bonus.  I actually had lunch with Steve Miller, who was one of the speakers, and we had talked a bit about how advocacy walks a line between protest and lobbying.  On one hand, you have to be an insider to get your ideas put forward, but on the other, you have to hold out the threat of protest to stop ideas that you think are bad.  It's a tough way to get really progressive ideas moved forward,  but it's a good way to improve the status quo.  I think as a long term strategy it's really important to influence who the decision makers are.  Steve told me an interesting story about how Mayor Menino learned how much fun bicycling was after he had an injury that prevented him from walking long distances. The fact that we have separated bike lanes today on Western ave is the way, way downstream result of one of his staffers giving him a  BSO while he recuperated.

There was a watershed moment here about 2 years ago at a meeting about the Craigie Dam Bridge reconstruction (work that is happening right now), where cyclists turned out in large numbers and insisted on being heard by the car- centric planners of DCR.  The redesign of BU to have bike lanes,  the possibility for cycletracks on Longfellow, the almost certainty that there will be bike lanes on Anderson, River and Western:  all these things stem from the overwhelming cyclist response that day to the  DCR planning department ( who were really baffled by the idea that there could be alternate goals to the bridge other than maximum throughput of cars).  We actually forced them to go back and redesign, through protest, and ended up with a much better solution through lobbying.  More importantly it lead to a better public process that involves bikers (as much as they show up at the meetings) in the decisions that are being made for infrastructure for our lifetimes.

After the talk I ran into an acquaintance, R.,  who said that she was biking to work regularly.  We talked a bit about biking in the winter, and dress strategies for that.
I could post about the best way to dress for cold weather (and probably will as the weather gets colder),  but really R.  and anyone else should go look at Let's Go Ride a Bike, because Dottie has it all figured out- how to be warm in Chicago in January and cute as a button.

But more important than any advice on the how to's and details,  I'll  tell  R. and anyone else that's starting bike commuting and getting a little nervous about the whole cold-wet-after dark thing the  REAL secret to winter commuting:

IT'S OK NOT TO BIKE YEAR ROUND
This, at least in my eyes, does not make you one jot less of a biker.  Biking should be fun- something you enjoy,  something that adds independence and freedom to your life, not obligation and a sense of dread.  So take a day off if it looks nasty out!  Or if you didn't sleep well, or have too much stuff to carry.  Hell, take a couple of months off (although I think in Boston it doesn't really get nasty until January  when everyone- not just bike commuters wants to move to Florida).
I didn't bike through the winter until I'd been doing it for three years, and it was so habitual to hop on my bike before I even had coffee that I just never stopped.  I still don't bike every day.  Trying to keep up a streak is a recipe for burnout and OCD.

By biking just when you enjoy it, you will love it.  And my prediction is that you will get addicted and find that you're happier when you do it every day, even if it's cold/ rainy/ dark.  But the key is letting yourself only do it when you love it, never forcing it.

As I was rattling off my strategies for Charles Circle, and seeing the dumbfoundment in R's eyes,  I had a  "how did I get here" moment.   I think that a side effect of successful life choices, is that in retrospect they seem obvious.   For me, biking is that way.  I can't really remember how I got here,  I can't really imagine my life without it,  and it just feels like the right thing to do.  Not because I have to, but because I love it.
Posted by cycler at 10:56 PM