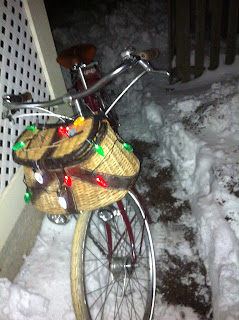 Got back to Harvard around 11, stopped at home just long enough to eat some breakfast (!)
and rode into work. I took a run at riding the Charles River path, but it was too snowy and "mashed potato-ey" to ride comfortably, so I portaged over a giant snowbank, and got back onto the mostly clear streets.

By 8pm when my day was over (lots of processing things from the site meetings, plus getting caught up from my extra day traveling back from vacation)  I was so tired I didn't think I could make it down to the lobby, let alone ride home.  The Scientist offered to pick me up, but I wanted my bike for errands over the long weekend.

But (here's the truism part)- I got on my bike, and I started to ride,  and before long,  I felt better: more relaxed,  happier, less tired.  How many drivers finish their commute and say "I feel so refreshed?"

It's a founding mythology of bicycle commuting, that a good ride home cures all ills- it's so oft repeated that it's almost a cliche'.  But you know what?  Just because it's a cliche' doesn't mean it isn't true.

I think that a lot of people who see me riding on a snowy day think I'm crazy or masochistic or maybe I have a DUI or can't afford a car.  But they just don't get it.  It's just not something you can understand until you've experienced the endorphins of a good ride home
Posted by cycler at 10:58 PM