Gilbert returns, with a gift

Went to Harris to pick up Gilbert this afternoon,  where I ran into Velouria of Lovely Bicycle, and her Co-Habitant scheming away on her next fabulous project.  While Minerva's front wheel was being made as true as a steel, Indian made Westwood rim can be, the Co-Habitant and I got a look at the "new" Radbot, rear bike light  that I'd heard about, but never seen on a bike.  It IS very bright, and had a nice "slow" pulse flash that I found less annoying than the super strobe.  While I was waiting, I also drooled over a fabulous  "Hetchins" bike with these amazing copper enameled lugs, evidently one of Elton's amazing collection of meticulously restored bikes.  unfortunately I only had my phone, but hopefully even these mediocre photos capture the details of this bike! 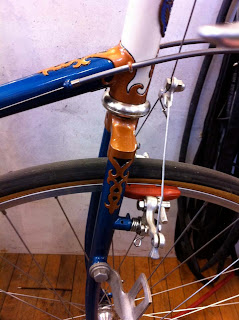 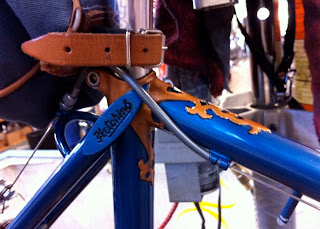 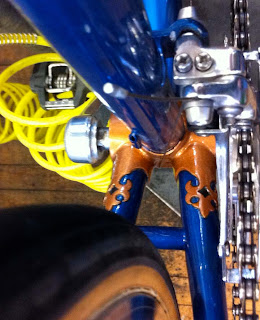 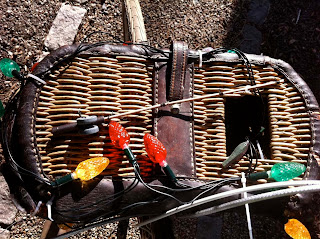 When I went to collect Gilbert,  I found that he had acquired a "present".  Evidently Elton had a "Fishing"  themed Christmas wreath,  and he thought that this miniature rod and reel just belonged on Gilbert's creel basket.
Posted by cycler at 6:06 PM