Minerva gets a turn

Gilbert is at the shop today after suffering a sudden failure of index shifting.   I was riding Wed morning,  stopped and got off for a couple of minutes, and when I got back on, it wouldn't shift out of 5th.
This being a fairly stiff gear for crossing bridges, starting up hills etc, I biked to a good locking place near the nearest T stop,  and then went into work and home via T.   When I rode back from the T stop to home in the evening,  again it shifted once, then stopped.
I'm hopeful that it's a cable issue and that either replacing or lubricating and adjusting the cable will solve the problem, but this time of year I don't have much time to mess with the bike.
Luckily I happened to be driving out to a job site in Newton and would be passing Harris, albeit well before they opened, so I changed my zipcar to a ziptruck and dropped it off on the way.

Arriving back home from the jobsite around 10, I considered just walking to the T.  But it was so so cold that I thought I'd actually be colder in the 10 minutes on each end I would end up walking than I would be in the 30 minutes it would take to bike.  So Minerva got a turn to go to work.

I don't know if it's just faulty memory, or the cold weather, but I actually think that the front brake was more aggressive than I remember,  but I still think it would be nice to have it be a little more aggressive.
If anyone had been biking behind me on the path this morning they would have thought I was disturbed because I kept accelerating, then slamming on the brakes- trying different combos (front only,  rear only,  both). 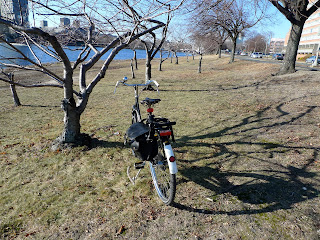 I stopped to take some pictures of Minerva and the skeletal trees (and their shadows).  By that point I'd warmed up enough to unzip my shell (was wearing a cotton T shirt and a very heavy wool sweater,  cords, wool ski socks and la Canadienne boots. And puffy insulated gloves (warmer than leather gloves, not as warm as ski gloves). 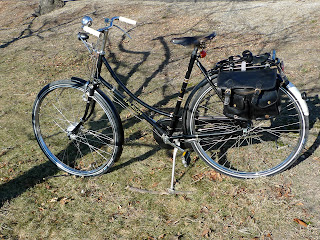