So after our failure on Monday, we met up outside the Scientist's office Tuesday and then headed to Cambridge 1 in Harvard square for yummy wood grilled pizza.  It's almost as easy to walk to Harvard sq, but since we were already on bikes, we went ahead and rode there.

This morning, was not super hot, but very muggy.   I used a good summer strategy which is riding in a strappy summer dress which might be a little bare for the office, and carrying in a shirt that I put on once I got to the office.  I did forget the all important linen hankie though, so I was a little damp when I got in.
5 minutes later,  after a bit of purell and an iced coffee, I was cool and composed though.

On the way in, I passed Renata von Tscharner  from the Charles River conservancy.  She was on her way to a fund raiser at the Ames hotel (home of these bikes).   She looked very elegant despite the heat in a sleeveless shell and pencil skirt. 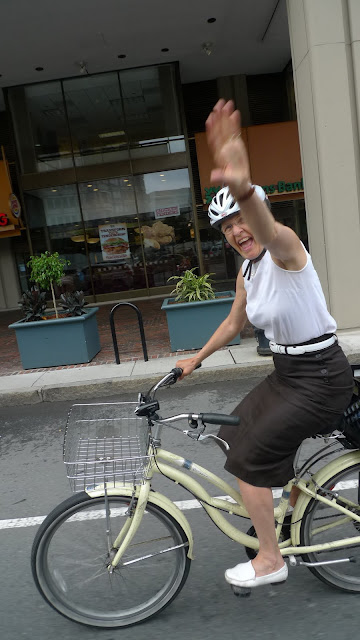 She really was waving and calling out Hello,  not "no pictures please"- I swear.  I love her enthusiasm and how she rides year round on that sage green cruiser, with a milk carton strapped to the back.  Although her principle advocacy has been focused on the Charles river, she is a fierce advocate for bicycling and pedestrian infrastructure,  probably because she spends a lot of a time as a bicyclist and a pedestrian!
Posted by cycler at 2:16 PM