Sorry for the radio silence, have been super busy on an advocacy project for the Longfellow bridge construction that I'm trying to condense into a manageable post.  In the meantime....

She's gonna hate being the namesake of such a homely thing, but Velouria, of Lovely Bicycle had a great suggestion a couple of weeks ago for using pairs of plastic bags in tandem as panniers.
The CSA season started for me last week, and I completely forgot about it until I got to work, which meant I only had my normal small-ish leather daily bag .   In the past I've resorted to making temporary panniers out of boxes or baskets, secured by rack straps,  but this time I decided to use "V-Panniers" 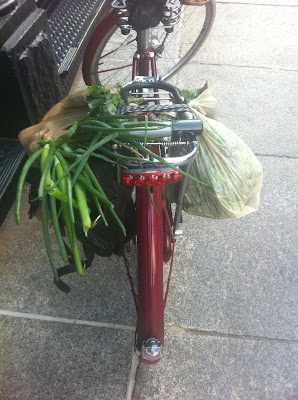 These were a bit hampered by the fact that I had my normal bag on the left side, and the bag just sitting on top of it.   I put the heavier bag on that side so that it would be partially supported. 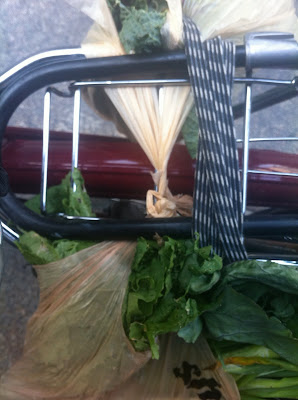 I put the knotted portion under the "rat trap"  and then latched it down with a lock and rack straps.
Bottom line,  it was fine for a couple of Kolrhabi and a bunch of bulky but light greens,  but I'm not sure I'd trust it with heavy stuff like cans of tomatoes or peanut butter.   Not a bad solution though for an emergency!  Necessity is indeed the mother of invention.
Posted by cycler at 10:08 PM