Long run for a short slide

Two weekends ago, at the very last minute, I decided to go to a "bike swap" out in the center of MA.   It's a little amusing to me, having grown up in Texas that in about an hour's drive you can get halfway across the state.   I had heard about this swap meet via the Old Roads website, and it was in Dudley, a small town south of Worcester, almost to the Connecticut border.   I had heard that it could be a giant event, full of guys with no teeth, who pull vintage bikes out of dumpsters and old barns, and that by sifting though the trash there was the possibility of treasure. It was this possibility that compelled me on a grey Sunday morning to get the Scientist to drive out with me to the "wilds." 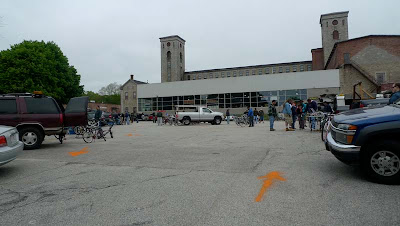 Unfortunately it turned out to be a bit of a long run for a short slide.  We spoke to a couple of vendors (bringing a small and very friendly dog along is a great way to start conversation with anyone)  who said that it was much smaller than usual, and that nothing was selling.   Most of the vendors were selling heavily modified "chopper" style bikes out of the backs of conversion vans and pickups- some even had motors and were styled after motorcycles or dirt bikes than regular bikes.  Not really my thing. 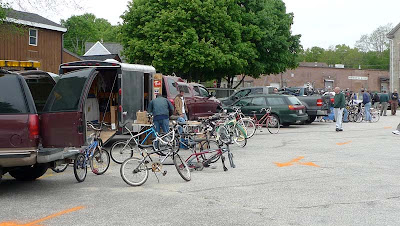 There were a handful of decent English three speeds and similar city bikes. 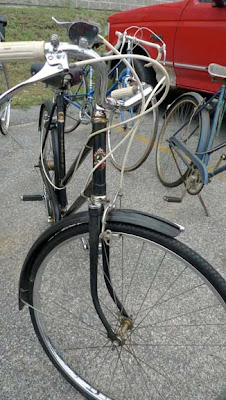 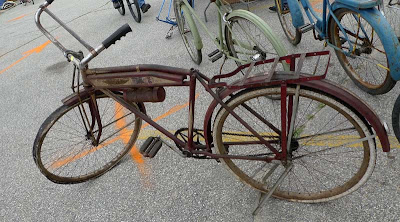 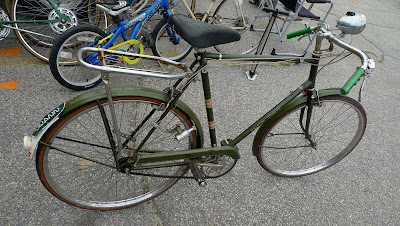 I like the nostalgia of these child seats, but they don't look terribly comfortable: 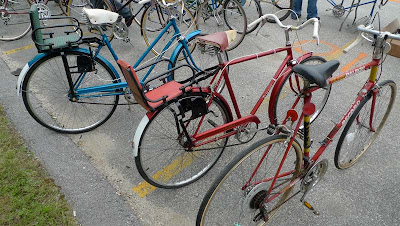 This vintage tandem was out the parking lot.  I wanted it, but the Scientist did not  :( 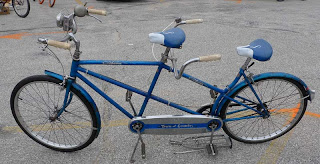 This van had a very, very tall bike strapped on the back. 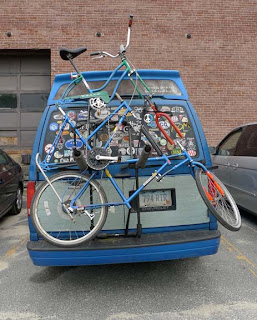 Nothing really tempted me enough to buy- the prices were very low, but I already have enough English three speeds, don't need another project.   Although after I got back home, I realized that I probably could have bought a couple for $50 each,  lubed the hubs, cleaned them up, put new tires on and sold them on Craigslist for $150.  I know that a lot of people do that, but I on reflection, I have a job,  and it's not flipping bikes.  I barely have enough time to work on the bikes I have, so it's probably better not to take on further obligations.

However, if you're interested in getting a project bike for a very low price, it would be worth it to check out this kind of thing, in hopes that you will discover treasure.
Posted by cycler at 12:11 PM