Like Randonneuring, but in the pursuit of coffee.
This morning was kind of grey and although not really that cold (37) felt dank and chilly.   The Scientist went immediately to work after waking up- his grant is due tomorrow.  I've got work to do too, but first- coffee!  I decided to head to the new branch of High Rise Bakery on Mass Ave near Porter Sq.

I was hoping we could ride out together for coffee/breakfast, but he didn't have time for that.
So I saddled up alone and went for a quick "Utilitaire" 3-fer.  First stop the library to drop a book off (they're weren't open yet). 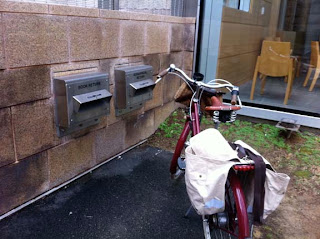 Then instead of just bombing up Mass Ave to the grocery store in Porter Sq, I decided to cut through the neighborhood, going up Oxford through the Harvard and Leslie campuses.  Noted these blooming bushes- I don't actually think they're forsythia, but they look a lot like forsythia. 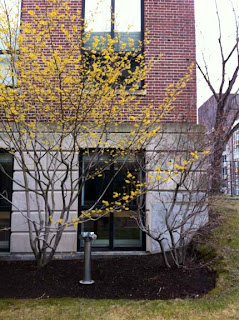 A quick grocery run got sandwich fixings and carbonated beverages.  Then back down through the same neighborhood,  parallel to Mass Ave, down to where Hi Rise was.

Unfortunately I only have one coffeeholder on my bike, so I had to ride one handed all the way home- and there was a bit of spillage unfortunately.  My PDX design works holder continues to do a great job. 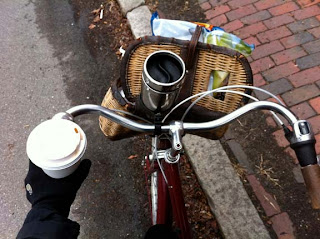 I've been trying to get into the habit of taking coffee into work with me this last week (which is why the Scientist bought it for me).  The only problem I've had is that if there are some drops of coffee left on the top post-sip,  they tend to become airborne when I hit a bump, and then get onto my clothes.  If I'm careful about making sure I don't leave any drops, it's not a problem.

* Utilitaire 12.9   Coffee breakfast.  This is one of the few I've done which didn't have a night time riding component.  I still used my regular generator running lights front and back (Edeluxe on front, 4D Lite Plus on the back) and because it was kind of grey and contrastless, I ran my PB superflash on the back of my helmet.
Posted by cycler at 4:56 PM