This mild winter has made me a wimp about cold, because I've been really chilly  (mid-20's) the last couple of commutes.  It's supposed to be 60 tomorrow, so fortunately I won't have to "suffer" too much this week.

Yesterday was a real Monday.  I got out the door a bit late, then 2/3 of the way there, realized that the tub of home-made yogurt I had made had popped its lid, overflowed the plastic bag I'd placed it in, and was dripping through my basket and down my fork. All I'm going to say about the rest of the ride  is  that yogurt soaked gloves don't insulate very well.  A very busy day followed, culminating in issuing a set of drawings at 9:30 and a nice ride home on nearly deserted streets, followed by dinner of ginger snaps spread with home-made orange curd.  YUM.

Having worked so late, I felt entitled to take a more leisurely ride in this morning, and took the opportunity to document my ride for the Utilitaire.   Riding to work (actually a lot of the Utilitare things like riding to stores and restaurants) are such a normal part of my day that photographing and blogging them seems a bit, well, odd.  I mean,  would a driver blog about their drive into work?  Existential doubts aside:
I start my ride basically here- and this is the construction site that's been bedeviling me for the last couple of months.   There are generally cops working "traffic detail" , and they like to stand in the bike lane.   The construction guys have also been lazy about getting city parking permits, deciding it's easier to just park in the bike lane.  Fortunately Cambridge has also been enthusiastic about ticketing them (when I call or email, I stress the revenue that they're losing from the company not buying temporary construction parking permits which would guarantee them on street parking spots).

From here I turn onto a relatively lightly trafficked residential street which looks like this for about 6  long blocks (parking one side, two pretty wide lanes) 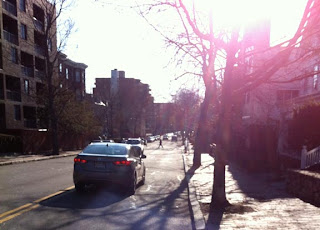 Right past where I drop off compost at Whole Foods, it turns into parking both sides, one car lane and one bike lane. 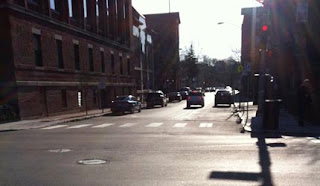 Then through the outskirts of MIT (Scientist's building immediately to my right).  There's a theme to these photos and the theme is that I ride into the sun every morning. Sorry. 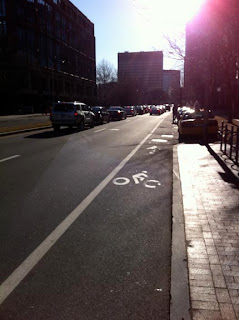 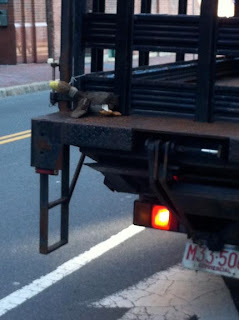 Makes me think of this recent JRA post
Next I dodge cabs that can't be bothered to stay out of the bike lane (this area is scheduled for major reconstruction in the next year, including cab stands more separated from the bike lane). 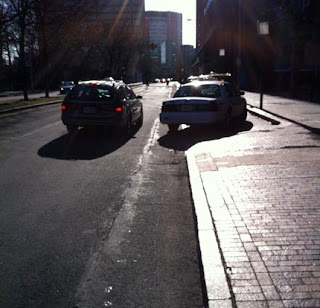 The Longfellow,  which is simultaneously a bit scary as  cars go WAY too fast and beautiful,  both for the historic architecture and details of the bridge:

and the panoramic views of Cambridge and Boston. 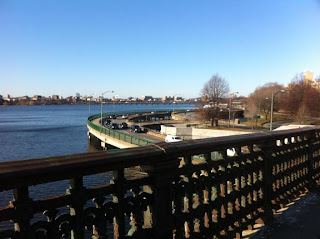 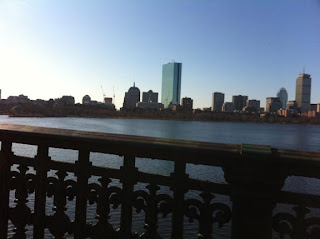 This is the  dreaded "Pinch Point" at the bottom of the bridge. 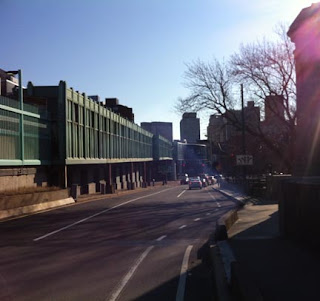 The subway station on the left gets wider,  and the road becomes three lanes but the bridge is constrained, so the sidewalk and bike lane get squeezed.  The sidewalk here used to be literally a foot wide. This on a major connection on the most used multi-use path in the city. They improved it to almost 3' temporarily until construction really begins in earnest.

The Medical Center (with gloved thumb in foreground) 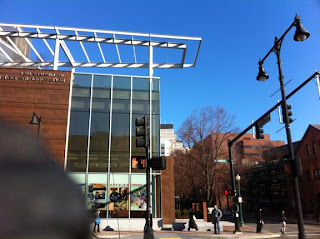 Cambridge street: (also with thumb)  it was COLD this morning, and I didn't want to take off both my gloves. 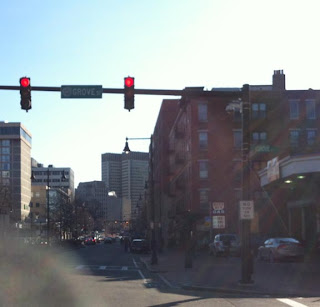 There's no good way around Cambridge street without climbing some serious (Beacon) hills, or dealing with the craziness of the Common. I would guess that 90% of bikers who live over the river and work downtown come in this way.   If the promised cycletracks around the Common and up Charles street materialize, I might change my route though.  The lights are timed in a way that slows traffic,  and really there's probably barely enough traffic to need two lanes. I take the right lane pretty aggressively and generally don't get any hassles. 70% of the time  (including this morning) the right lane is blocked in at least one place by an unloading truck, and I have to merge into the more heavily used left lane to get around.  Felt really slow up the hill today and think I might need to top off my rear tire.

Was too busy riding through it to get photos of the government center part.   Mostly this involves avoiding the double parked cars which are dropping off passengers.  I like to be in the left lane anyway, because I merge left at the top of the plaza in order to turn left at the next intersection.

This part is smack in the middle of  "ye olde" Boston.  I pass the famous Parker House hotel (rolls anyone?)  and old city hall, and the site of the first public school in Boston. 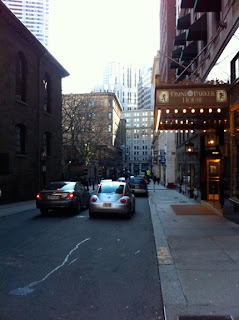 And the Old South Meetinghouse. 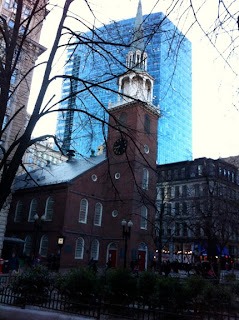 If you've ever been at tourist in  Boston, you've probably done the "Feedom Trail"  following the red line from historic site to historic site.   One good sign it's spring is when they repaint it.  We're not there yet. 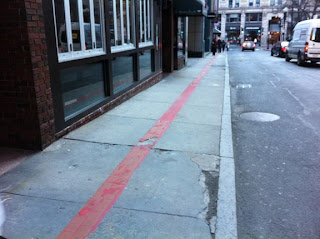 From here I pass the old Post Office- This is the worst area for obliviously jaywalking pedestrians.  At least once  a week, I'll be waiting at a light, and just as it turns to green three people will step directly into my path.  I yell "heads up!"  which I find nicely attention getting but reasonably polite and obviously not a swear word. 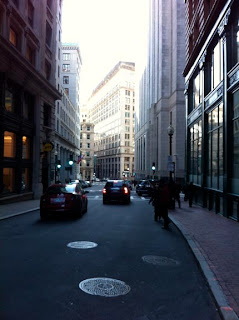 Do you recognize this intersection?  Hint, it has 5 streets and an alley going into it. 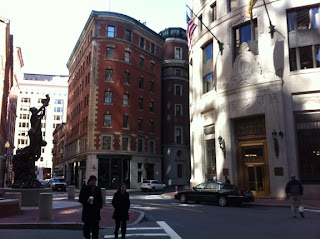 Unfortunately there's no cake,  but there is a pretty good turkish salad bar/ mezze bar place off to the left of the statue. 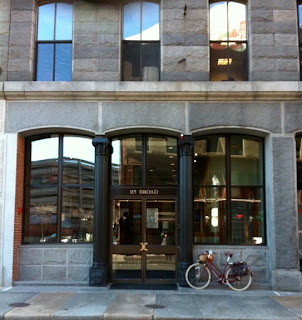 One of the best things about my office is that the greenway is 50 feet away.  Not so attractive on a chilly morning, but a great place to eat lunch in the summer. 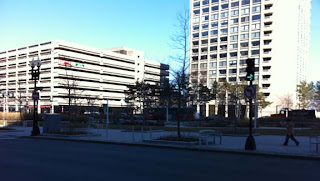 The other great thing about my office is that I can bring my bike up and park it next to my cubicle.
The building management doesn't really want us to do it, but my cyclocross racing boss doesn't care and there's no on-site management, so the three of us who bike commute do it anyway. 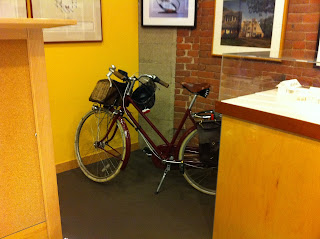 So that's a normal morning commute.  The evening one is reversed, but darker, at least this time of year.  I take Harvard St inbound (morning) and Green street outbound (evening), but they're essentially equal.
I take it for granted, but it's kind of interesting to see the range of urban environments I ride through every day.  Boston is a great city, and sometimes I lose sight of the beauty and richness of the city in my focus on getting from point A to point B.  So maybe it wasn't such a dorky idea to record the everyday after all.

Labels: Seen from the saddle, Utilitaire 12