I suppose I could have doubled up on more of the categories for the Utilitaire, but I wanted to add a bit more variety, so I looked for a lecture I could go to this week, and ultimately settled on a MIT Architecture public lecture about "L.E.F.T." Architects.   This firm, a pair of Lebanese-American architects based in NYC is kind of a classic "ART-chitecture firm.  They teach at places like Yale and Columbia, and they do very theoretical exercises that win a lot of prizes.   The one real project that they've built so far on their own (they've done some collaborations)  is very lovely,  and they have a real gift for form.
However, as an architect immersed in practice instead of academia, I have to wonder, why the creation of beautiful form is only considered legitimate if it has a dense (obtuse) intellectual narrative about politics and identity and conflict to go along with it.  Is beauty alone not enough?  I guess people think that beauty is too subjective in the modern era.   But intellectual narratives are subjective too.  So round and round we go.

I have a lot of thoughts about this, and the ambivalence I feel about academic architecture is why I don't make the effort to go to many lectures.    But I went.  By bike.   I got to ride on the Vassar street cycletracks, which is a pleasure. 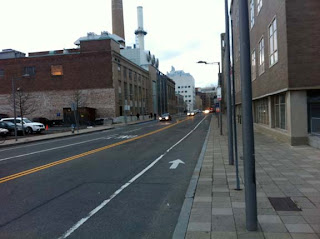 I passed the ghost bike of the MIT grad who was killed at the intersection of Mass Ave and Vassar,  apparently waiting at a light to make a left turn when a wide turning semi ran him down. Very sad. 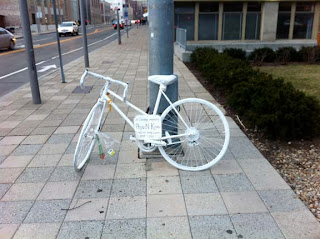 I took photos of some lovely details of the main MIT "rotunda" building. The kind of details that aren't fashionable anymore.  They've been replaced with dense narratives and intellectual determinations. 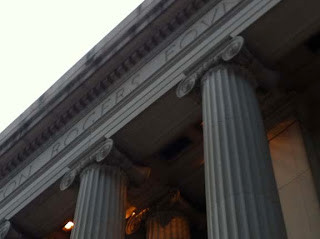 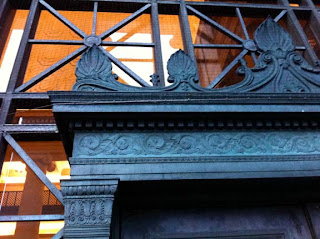 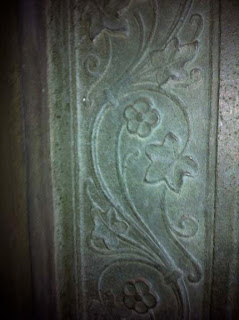 They sure are lovely though.
And I mostly enjoyed the lecture.  I think I should make more of an effort to go to lectures that might be more of my "thing" instead of lectures that fit into a prescribed time frame.   That realization alone was worth the trip, and I think will inspire me to go to more lectures.
Posted by cycler at 9:43 PM