Today felt a bit like I was riding in circles,  on different bikes, to different destinations, but making the same loops over and over.  Fortunately it was a gorgeous day to be out on a bike, so it wasn't much of a hardship to be out riding around and around.

My first trip was ostensibly to meet Utilitaire 12.8,  "to the Bike Shop."  I had hoped to bike out to Harris, but the time change and other things got in the way, so I decided to hit Cambridge Bicycle,  which is just barely far enough away to qualify.  I am almost out of chain lube,  and after reading some glowing reviews wanted to try Chain-L.  I headed out on Minerva,  taking a somewhat roundabout route so that I could drop off compost,  and followed my normal weekday commute up to the point where I hit the edge of MIT,  and instead of hanging my normal left, I turned right and then doubled back on Mass Ave to Cambridge Bicycle.

Unfortunately they were out of Chain-L, but I bought some other lube which I've used before with good results. I'm fairly undemanding on chain lube since I have chaincases on most of my bikes, but it's never bad to have more. 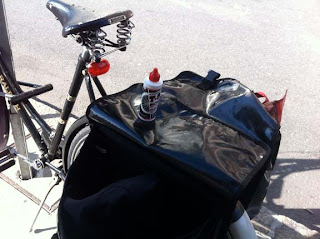 They had replacement helmet liners for Bern helmets, which I haven't seen for sale anywhere else.  If you had a normal Bern helmet these would be a good way to winterize your helmet (next year, as I think the days of needing that kind of extra warmth are over for the year). 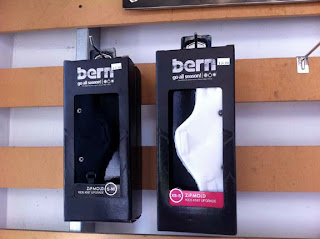 This antique relation of Minerva's was in the window. 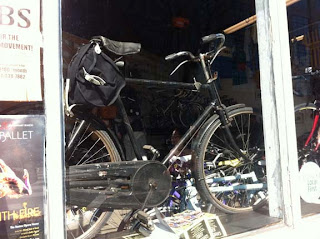 I thought I was badly out of season taking Minerva's Christmas lights off last week: 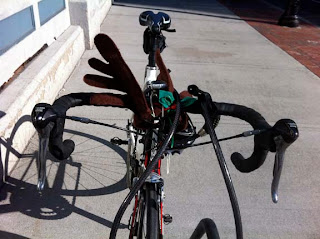 I headed back on the shortest route, down Mass Ave, because the Scientist called and wanted me to pick him up at lab.  I normally try to avoid this area because it's like a live-action game of Frogger, but it wasn't bad on a Sunday afternoon.  Lots of people out enjoying the warm weather, on foot and by bike, and even the drivers seemed mellowed out  a bit.

I got in the car, drove to MIT (pretty much following the route I'd just taken)  and giving him his car, got Gilbert out of his office's basement garage.   Gilbert had been hanging out there since  I abandoned my ride home Thursday because I was being blown sideways out of the bike lane!

We had a brief conference about dinner, and I headed home, passing Cambridge bicycle again, and stopping off at the grocery store,  where I saw a Paper Bicycle. 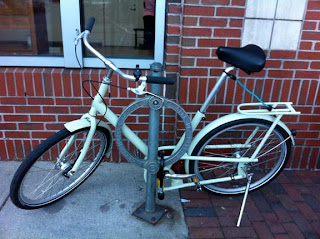 I'm not sure if that meant Velouria was around somewhere (Star market 4pm Sunday)  or if there's someone else with a Paper Bicycle in the Cambridge area.   I didn't see her in the store, despite doing an extra lap looking for her.

Looking at the Paper Bike in person, I think they're missing an opportunity to incorporate a light in the headtube/downtube connection. 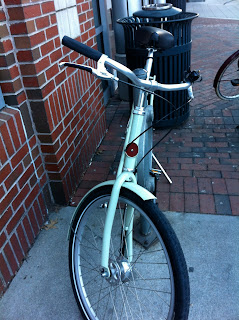 Home again, I started pressure canning some pinto beans and was getting ready to make dinner, only to realize I was missing a crucial ingredient.  So back to the store (Whole foods where I dropped the compost earlier today) again.

Dinner was a special occasion because I bought the Scientist a Meyer Lemon tree for his birthday in June.  It's been hanging out in his office by a sunny window, and we finally have the first fruits from it- four gorgeously fragrant lemons! 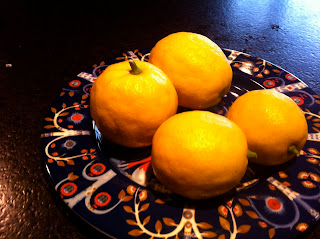 To showcase them we decided to make lemon risotto and trout with lemon sauce.
We made a fairly standard risotto recipe, adding a chopped whole lemon about halfway through. 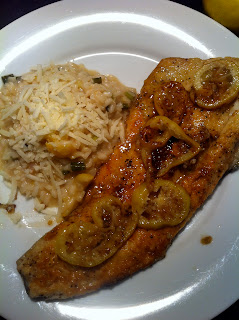 The trout filets we dredged in milk then flour, browning them in butter 3 minutes a side.  After they were golden, we added thin slices of lemon to the butter and pan juices and cooked them 2 or 3 minutes until they were browned and falling apart, then topped the fish with them.   Very yummy, and we have two more lemons to do something fun with.