A couple of weeks ago  the NY Times published this moving profile of a bicycle deliveryman.  They are much maligned for not obeying traffic laws, and there have been a lot of very punitive laws proposed to try to rein them in.  The irony is that it seems that a lot of the people who complain about them, are also quick to complain if their dinner is delayed by even a few minutes.  Or the time it takes to only go the right way on one way streets and wait at red lights.  I'm not saying that deliverymen are blameless, but perhaps there needs to be a better system that rewards safety and not just speed.   I know that there's a safety program aimed at delivery bikers and their employers, founded by a woman whose husband was killed (by hitting his head) after being struck by a delivery rider.

We don't have much of a bike-food delivery culture in Boston- I guess because it's not quite dense enough.  I know that Bertucci's and Upper Crust both have specialized pizza delivery bikes,  and I think that Redbones does some local bike delivery, but I haven't heard about much else in that vein.  It surprises me a bit that there aren't bike deliveries of Chinese food to the Financial district-  Chinatown is close, but far enough that it's a bit of a long walk, and there aren't really any good asian restaurants in the FD.  For that matter the North end is close too, but too far to walk on a regular basis,  but there could be a lot of business in delivering sandwiches.

Anyway, I was craving Chinese food, so I organized my own bicycle transport.  The ride there is a lot more pleasant now that they've striped bike lanes on the Greenway's surface roads.  I actually mostly get Vietnamese takeout from Chinatown (yeah I know).  But this time I tried a Chinese place, and I think it may be a winner.  Will have to do more "research" 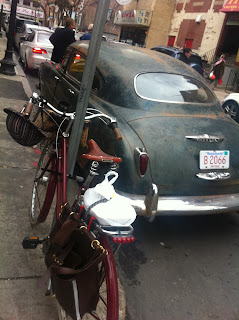 I parked next to this fantastically decrepit  Hudson,  which I had to take pictures of, because I think my Dad had one of these back in the day.   The owner and what I'd guess were his grown sons were taking photos of each other with the car and a restaurant in the background.  I volunteered to take a photo of all of them together.  It seemed like a family tradition or get together to drive into Chinatown and eat together.  I should have asked them, but after looking online I think this might be a Hudson Hornet-  anyone out there know for sure? 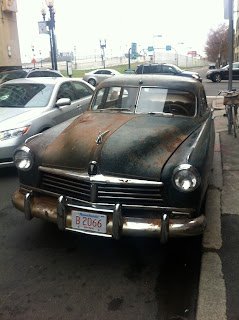 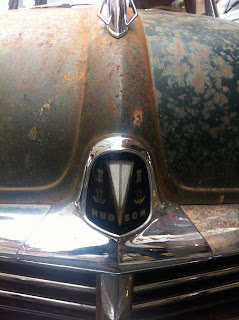 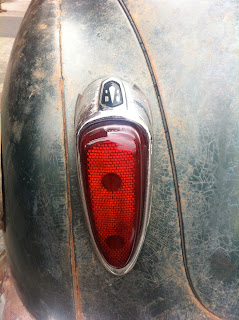 Although for gas milage reasons it's probably a good thing, they really don't "make them like they used to."   it would be nice to have more detail and character on modern cars to get the best of both worlds.