Last Thursday I went to the MassBike annual fundraising dinner.  I've never been to one, but I think that MassBike is a good organization, worth supporting, so I decided to buy a ticket and check it out.
They sent out an email the day before reminding us that the dress was "semi-formal"  To me that meant  this: 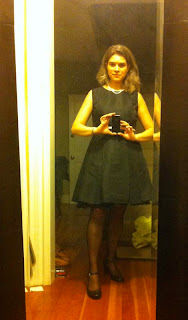 But as I suspected, it was really just a warning to people not to wear their rainpants or bike shorts.

The "Theme" of the night was "Beyond the Spandex"  and the evening's entertainment was to be a "fashion show" supposedly showing off looks other than classic racer kit.  I was skeptical, or as I told Cris during the cocktail hour, if you drew a Venn diagram of what I consider bike fashion and what MassBike considers bike fashion, I suspect the overlap would be very small.

There was a cocktail reception and silent auction first: 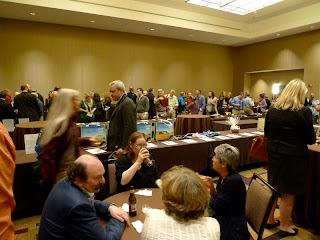 I got a chance to chat with Nick Jackson of Toole design, and Cris introduced me to Pamela Blayley, whose blog I've read, but whom I'd never met before.  She has the most amazing EmmyLou Harris hair- a gorgeous color of white blond.

Then I was seated at a table of random strangers, which turned out to be just fine. Pamela was there, when she wasn't getting ready to be in the fashion show. I met the #2 rider of Hubway last year in terms of miles.  And I got to meet Armando Quiros, a frame builder who specializes in beautifully brazed track frames.

He and his assistant, Victor, had brought a van load of bikes to use in the show.  I got some pictures after the show of Armando's personal bike with its liquid looking joints. 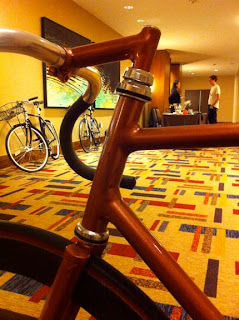 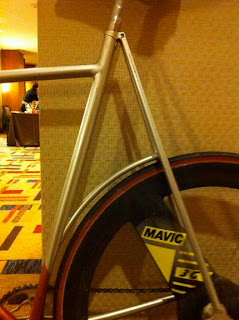 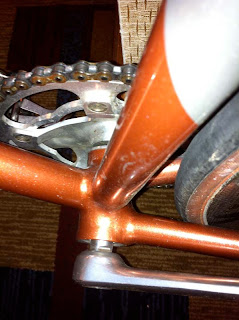 We had a nice discussion about tube types, powdercoat vs liquid paint, the collegiality of Boston frame builders, and his adorable 3 month old daughter.


The show was,  as expected, well, not really my thing.
There was Rapha fairly classic kit (not skintight, and probably wool) 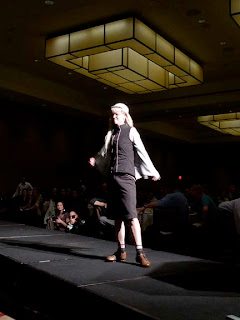 There was hipster cycling clothing- note reinforced shoulders- I guess for a backpack ?!? 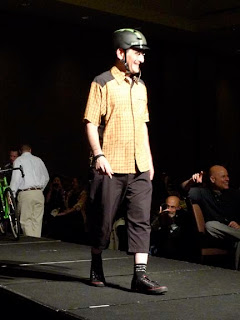 And lycra-heavy "athletic dresses"  like something Serena Williams would wear. 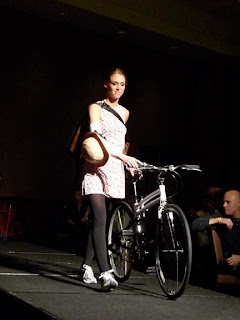 These are all fine options for sport cycling, but having them presented as fashionable biking attire would give Mikael Colville-Andersen seizures.
I'm not exactly a fashion plate, but I can do better than that (see top photo above which is what I wore for the six mile ride home at 10PM)
I think that the emphasis on making special recreational clothing that doesn't look like you just got dropped by the peleton is not really getting "beyond the spandex"   It's just pretty spandex in pastel colors.   If you really are doing a lengthy sport ride, why not just wear bike kit and be done with it?  And if you're riding 5 miles to work, in most cases, you'll look better and it will be easier just to wear what you'd wear to work anyway.  To me riding in your normal clothes is what's truly "beyond the spandex."  I am hopeful that MassBike appreciates that distinction, but I'm not sure that as an organization they're really thinking of cycling as more than something sporty and athletic and sweaty.

I know that the point of a fashion show is to sell stuff, and that it's hard for many people still to use bikes as a way to sell everyday clothes.   It seems like this can be done though, see
this and this example.  I just don't think this was a particularly good example.
Posted by cycler at 10:03 PM