Ok, officially they're "bike to work week" events but if every week is bike to work week, you can appreciate the free breakfasts, and enjoy the chance to chat with your fellow commuters over a light breakfast!  There are a couple of people who I've chatted with at these things over the years who now I see regularly, which is a nice thing on my ride.

We had the first sunny ride this morning in what seems like forever, which was lovely.   It gives me hope for the weather next week.   And I saw something that will surely become a regular feature of my commute. 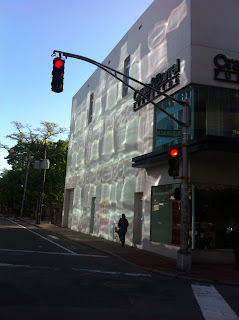 The glass causing the reflection has been in for a while, but this was the first time it had anything to reflect.

In other nice weather news, one of my coworkers reported that at one intersection he was at this morning there were more bikes (7) than cars (5) stopped.

The week is bracketed by two women- focused events which are open to all riders, male and female:

Boston Bike Belles are organizing a Cyclofemme ride from Harvard sq to the arboretum this Sunday the 13th, which I'm thinking I'll probably hit up, at least for part of the ride.  Info here.  Bring your Mom if you can!

This month's Ladies Who Bike Brunch, is going to be slightly different- Since Bikeyface is one of the founders of the brunch, and we were kind of talking about having a picnic anyway, we're going to roll the brunch into the Bikeyface Bikenic on the common near the Frog Pond.  Sunday May 20th at noon.  If there's rain the bikenic will be cancelled, but we might reschedule the LWBB.  Check here or at the facebook site for details.

In terms of free breakfasts, I mostly know the Cambridge ones.  The Harvard Sq one is sponsored by Harvard and has lots of good swag (bike maps, blinkies etc).  It's on Wednesday at the AuBon Pain in Harvard Sq.

Broadway Bicycle always has a pancake breakfast on Tuesday. The only time I've ever gone,they got started pretty late, so I couldn't really get anything to eat as they were still getting organized. I suspect it was better organized later in the morning, but I have to commute earlier :(  If you have a flexible schedule this might be a good bet.  And you could grab coffee at Barismo across the street!

The Charles River Transportation Management Association (the people who bring you the EZ ride) host breakfasts several places:  Alewife on Tuesday,  and Kendall on Thursday.

And then of course there will be giant Bike Breakfast at Boston City Hall on Friday Morning.  This is part of their summer long "Bike Fridays" events.  There are convoys in from various neighborhoods in the city, more information on the website.  They'd like for you to register so that they have an idea how many burritos to get.  They'll also send you reminders of Bike Fridays the rest of the summer.

Oh, I almost forgot to remind everyone that the Rush Hour Race will be on Monday.  I probably won't be able to be there (being a workday and all)  but if you can go in a little later, it would be fun to watch, or to be there at either the start or the finish.