Merrily we roll along

Had a great time at the Cyclofemme ride on Sunday, was great to see some familiar faces, and meet the organizers of the Boston Bicycle Belles. 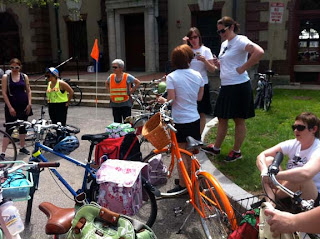 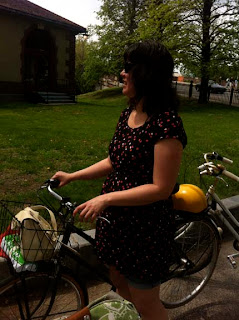 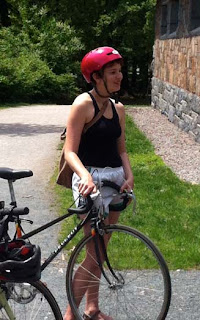 Had to turn around in the Fenway rest stop and head home though because I was trying to replace my instant hot water heater that I rely on for coffee making every morning.

When my new-ish hot water heater died after about a year's use, my Dad and I thought we'd pull a fast one by installing another one by the same manufacturer that my Dad happened to have lying around (long story).  However the installation is a tiny bit different, and I can't seem to get it installed without leaking.   GRRR.  I was so sore on Monday- my quads and hip flexors were complaining about all the contortion under the sink.

Because I "sunk" so much time into that, there wasn't much left for other things on my "To Do" list, although I did manage to get Gilbert's rear wheel reinstalled (FINALLY)  while watching Sherlock.
It's handy to have the bike repair stand set up in the TV room!   I've become crazy addicted to Sherlock, to the point where I'm considering buying the DVDs so that I can see the 8 minutes they cut for "messages from our sponsors."  If more TV was like this, I'd watch TV, so it's probably a good thing because I really don't have time to watch more TV.

I've still been riding Minerva this week though,  because I haven't had the time or energy to do a shakedown ride on Gilbert.  I'd rather find out that I didn't properly adjust the brakes while riding around the block than halfway to work.  We also have an "interloper" in the bike shed, and I'm not wanting to figure out how to fit a 6th bike in there. 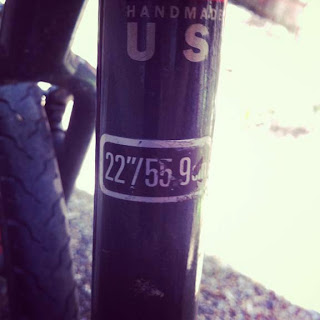 The Scientist's citified mountain bike has been lurking at his office for months, the tires slowly deflating.   I wanted to fix it up so that he had an alternative to his road bike for riding around our neighborhood,  but how to get it home?   This bike is a 22" frame, which is actually a bit small for him (6'5").   I ended up at his office on Saturday morning, and needed to get home, so I pumped up the tires, which seem to hold air just fine (knock on wood)  and then I pushed the seat all the way down, did a quick ride around the loading dock to make sure I could dismount without hurting myself ( I can just barely straddle the top tube without damaging myself.   Of course, I was wearing a skirt, but by tipping the bike sideways, I could mount reasonably demurely, and managed to ride, slowly and cautiously the 2 miles or less home.

Now that we have it, I'm soooo wanting to give it a makeover to make it look more like a proper city bike (I'm thinking hammered fenders and  flipped albatross bars.)  But I'm not sure it's really that kind of bike, and I don't want to spend too much time and money on it, seeing as he really needs a larger frame.  I keep trying to talk him into a Surly LHT now that they're making a 64" frame,  but he's not really interested in that either.

I did drop by the Broadway Bicycle School Pancake breakfast this morning, but took no pictures because I forgot both camera and phone!   I saw a couple of familiar faces, and got a chance to briefly talk to a couple of new people before I dashed, off to work.   They had a barista from dwell time making pour-over coffees, but I didn't have time to wait in line, unfortunately.  The pancakes were sure good though, and I'll try to get there earlier next year so I have more chance to chat with people.