Went to the Harvard bike breakfast in the Holyoke center this morning.  The tuneup mechanic looked lonely in the misty drizzle, as everyone else was inside.  I was perusing the swag (bike maps, seat covers, little red blinkie lights that are great emergency lights of last resort)  when the woman organizing it came up to me and said,  "I'm sorry but this is only for people who rode their bikes"  Because there's no way a woman in a nice dress and heels could have ridden a bike right?   GRRRR.  I showed her my helmet and said,  "I bike all year round, almost every day."   I understand that she was running interference on free breakfast in an area where there are a lot of walk-through commuters, but I wasn't even at the free breakfast part of the setup, but at the information table.  God forbid someone who "doesn't look like they ride a bike" should have access to information about biking. 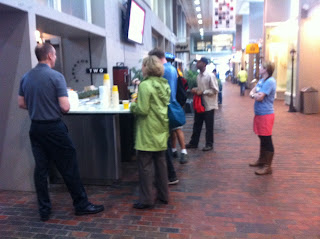 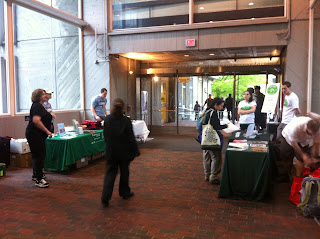 I "won" my choice of prizes in the little "raffle" they were running, and given the choices of a CO2 inflator, a mirror, and a cable lock, I chose a cable lock.   I don't actually own a cable lock, and maybe it would be good to have one for some occasions (locking to lamp-posts, locking my rear wheel,  locking to another bike).   Unfortunately it's likely that the times I'll need it, I won't have it, because I won't be in the habit of carrying it with me. 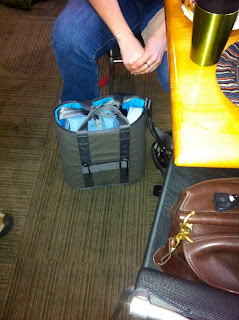 I sat down to a yummy breakfast of melon and chocolate croissant,  and was chatting with a nice lady at my table about panniers, when I saw a stereotypical "Bike Commuter" checking out my shoes.  He skeptically asked if I had riddenthere, and I said, yes, I had.  He asked, "how to you ride in those shoes"?  I said,  I ride using the ball of my feet, not the heel,  don't you?  He said, but don't you hurt yourself on the toeclips?  I said, I don't have toeclips, and he looked at me incredulously. 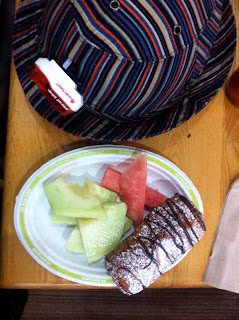 This kind of really clueless behavior IS becoming less prevalent.  At the Broadway Pancake breakfast, most people were in kind of hipster stuff,  the kind of clothes you could wear to an IT or biotech job without any comment.  The one guy at my table in lycra said, "Yeah, when I get to this part of town I feel like a bit of a weirdo because I'm the only guy in lycra."  He was riding about 10 miles each way from Winchester, so it probably makes sense for him to wear athletic clothes and then change.  But I think it's really great that people riding in "normal" clothes is becoming the norm, and I hope that I will not be an object of curiosity at these events much longer. 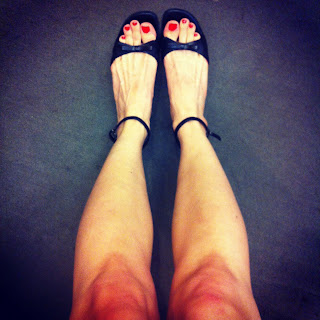 It started to rain as I headed off to work (a bit late).  I'd probably have been completely dry if I rode in at my regular time.   As it was, my legs and the bottom of my skirt got damp.  Legs are much faster to dry than any kind of pants,  and they work for me as "rain pants"  A quick brush off of road grit after they're dry and I'm good to go.   My shoes were fine for most of the ride, but by the end, my feet were slipping against the damp leather of the footbed a bit.  It was fine for biking, but when I arrived at work the elevator wasn't working, so I took them off to carry my bike up the stairs.  Fortunately our office is only on the 2nd floor, because carrying a 40lb bike up stairs is not much fun.

I'm testing a home-made skirt garter to keep my skirt in place while riding.  This is a beta version and has some issues.  It doesn't keep the skirt down really, but it does prevent it from flying completely up.

It tends to ride down, I need to create a version that's adjustable on my leg.  Am working on it, but having a hard time finding the right elastic. Need to try Windsor Button.

The rain is doing great things for my garden, if not for attendance at bike week events: 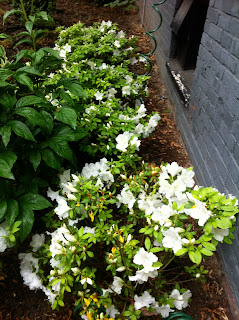 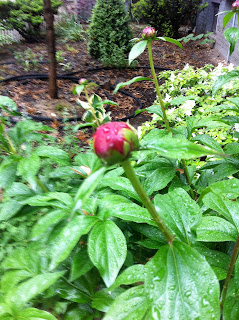 Tonight I'm going to the Ride Of Silence.  I don't like to dwell much on those killed while bicycling, because it's a pretty rare occurrence,  but I was very saddened by the death this year of a young MIT alum in an area I bike through regularly. He was apparently waiting at a light to turn left, when a tanker truck made a wide turn into his lane and ran over him.   The MIT Tech is doing a good job of keeping on the story, filing a Public information request for the records.  It incenses me that there will be no consequences for the driver for failing to stay in his lane,  when the consequences for the biker were so tragic.

I'm still processing my feelings about this, and hope to post on it someday, but in the meantime I plan to attend the ride.