The city of Boston has been on a big push to install bike wayfinding signs all over.  Although I have downtown pretty well figured out, they rightfully are expecting a lot of bicyclists (summer tourists on Hubways) to be wandering around trying to figure out how to get where they're going.

I like that they're simple and destination focused, but I haven't yet tried to follow them to see if there are follow ups that actually keep you on track. 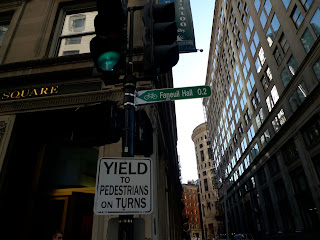 I think this is really a step forward for Boston, because instead of just assuming bicyclists are the hardcore regulars who've been doing it forever, these signs allow for the casual rider, the out of towner, the newbie making their first trip into the city.

These signs can also be important for guiding riders to the safest, lowest stress routes.  Since they're just being rolled out, I'm not in a position to judge them, but since I keep seeing them on the routes I've found to be my favorites through years of trial and error, I'm optimistic that they're in the right places.

Two stories that resonate:  Bike Portland just had a story about an out of town visitor who was guided (by a bike map no less) onto a really scary bridge (the local equivalent of the River Street bridge, or maybe even the Tobin).   He felt like Portland was so generally bike friendly, and finding himself on this route really was a smack in the face.  Boston can really shape visitors experiences of the city by helping people get around safely.

This morning, I stopped on the way to work to grab a bagel and as I was locking up a meter reader came up to me.  From her purposeful stride, I was worried that there was some obscure regulation that forbade me locking to that sign, but no, she wanted to talk about biking to work.  She asked how far I rode (5 miles)  and how long it took me, and had lots of questions about how I dealt with sweat and clothes.  I have to admit, I was not feeling my cleanest, having misjudged the weather and slightly overdressed.   I told her, fairly, that this was about as sweaty as I ever got, and that I just brushed my hair, wiped my face, and sometimes wiped down with Purell.    I asked where she would be riding in from, and I think she said Malden,  a northern suburb.  I honestly had no idea how I would get downtown from there- I know some people who ride down 99, but I think it's pretty hairy.  I recommended that she go over to Mass Bike ( a block from where we were standing) and that they would be glad to help her plan a route.  I hope she did drop by and that they could help her.   She seemed pretty plugged into bike culture- asked me if I'd heard about the bikers in Berkeley who caught a hit and run driver through their bike cam.

I was really pleased that she wasn't focused on safety or how scary it must be to ride in the city.  I honestly don't think it's that dangerous, or else I wouldn't do it- I pay attention, and I ride safely, and I haven't had a wreck in years.  I don't think of myself as a particularly brave person- I'm particularly timid about shocks and startles- my definition of a scary movie is Ghostbusters!  Safety dominates so many conversations that I have with women who don't ride, that it was a relief to talk about sweat, and purell, and the mechanics of looking professional after riding to work.
Posted by cycler at 9:57 PM