I've been trying not to complain about the cold and blustery "spring" we've been having, because, in all honesty Spring in New England is always tough. Normally though it's tough because we'll get 2.5 gorgeous 65 degree days where every flower in the universe is blooming its little heart out,  and then we'll have 4 days of 34 degrees and rain.  Instead,  we've just been having 42 degree days, day after day, with a couple of 42 degree rainy days thrown in for variety.

It's mostly been cold and sunny though, and Thursday was no exception.

The day started out inauspisciously when I came across the aftermath of a bike accident.   I was close enough to the event that no one else had called 911, so I did.  When I arrived there was a biker huddled on the ground rocking in pain, with 4 people standing around her.   I stayed just long enough for the police to arrive (3 cars, sirens blazing) and to get the license plate numbers of the "witness" cars.  By this point the biker was up on her feet, with some pretty nasty scrapes.  I gave her a cookie (just happened to have 2 dozen with me) to try to get some sugar in her to prevent shock,  gave her a note with my phone number and a note about the license plates,  and headed off.   I overheard the first part of the police interview, and it sounded like she'd been doored by someone exiting the passenger door of a car in the travel lane next to the bike lane.  The couple from the car seemed nice enough- they were being very solicitous to her, but I hope that the passenger got a ticket anyway.  I thought about saying to him- let this be a teachable moment to you, and share with all your friends-  look before you open your door into a bike lane! 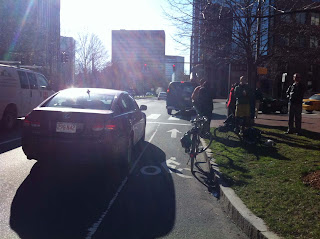 The victim at the right in the mustard colored skirt.  Based on the tire mark on the door, I think she may have been stopped at the light slightly in front of the car.

After lunch I ducked out of work to go to the announcement of the bike share program at city hall.
I didn't stick around to hear all the speeches,  but there was a good crowd of what I would estimate at  75 people- 25% news media and 75% bikers.  Although I don't think I'll use the bike share much myself, I am cautiously optimistic that it could have a positive effect on the bike culture of the city, as it has in Paris, Barcelona and Montreal.   I would definitely use it for "last mile" transit connections,  although it might be a while before it's at the size where it can really support that kind of usage.

There were some great bikes/ cyclists in the crowd- 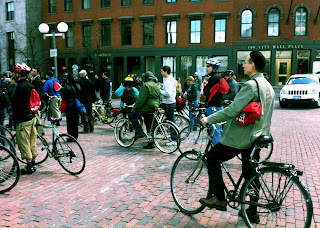 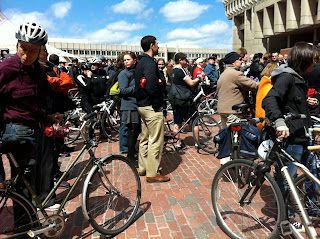 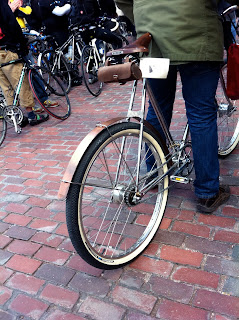 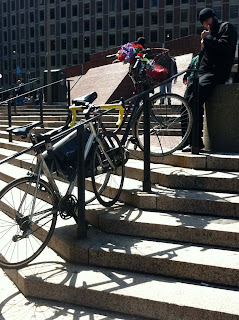 The ride home was CRAZY windy.  I was being blown all over the place by unexpected gusts from all quarters.  Wind is one of my least favorite elements of biking downtown.  A steady headwind is no fun, but you just duck your head and grind it out.  The gusts that emerge from between buildings will blow you sideways in their unexpected strength.  I was glad not only that I had gloves, but a fairly warm coat, and it was nice to get home and have a nice warm dinner.
Posted by cycler at 9:09 AM