Had a 4'6" tube of aluminum trim channels delivered at work, and had to take them home by bike.
That's an unusually wide load for me,  and I was very conscious of it the whole ride, giving parked cars a lot of clearance.   I took the Charles river path home, partly to get more space,  but it was a constant battle to avoid whacking headphone wearing pedestrians, and metal crash barriers.

There were a couple of places in particular- at the BU bridge construction and at the new pedestrian overpass construction near Magazine street,  where the path was extremely narrow, and I had to wait for oncoming traffic to clear before I could proceed. 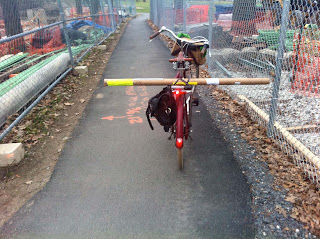 I got home, took the small-brown-dog for a walk,  and then headed out again in the other direction to Home Depot,  where I picked up shelf pins,  break off screws, double stick tape,  rug underlayment and a 4' length of 1x6 baseboard. 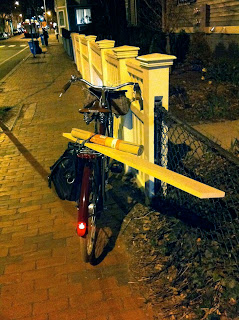 For better or for worse, the stretch of path between Harvard and Arsenal street is much less travelled,  so I wasn't constantly worried about smacking passers by and inanimate objects.  However it's a bit spooky to be the only person on the path that time of night, well lit as it may be.   It was good to get home safely after a long evening of schlepping stuff.
Posted by cycler at 9:44 PM