I had a great time at the site walk on Saturday.  The weather was just warm enough that as long as we stayed in the sunshine, it was comfortable, although the couple of stops we made in the shade had everyone shivering.  There was a quite respectable turnout of about 25 people, some who were affiliated with the groups hosting the event, and others who were just interested members of the community.  Unfortunately I rushed out the door without my camera, so it's a wordy  post without many images.  I'll add some maps though.

We walked from the DD on 3rd street to Lechmere station.  It's a wood timber and steel girder, open building which is more like a bus shelter than a train station.  It was built in the 1920s as a "temporary" building, but never was replaced.  Right now the train line crosses from the north side of 28 to the south side,  and lands on this little triangle plot, which holds the station and a turn around for the train cars.
The plan for the future is for the track to stay on the north side, and to build a new station about 50' north of rte 28.    First Street will be reconnected to Rte 28, which is something really desired by the neighborhood, because currently the only place to turn west from that East Cambridge neighborhood is 3rd street which is mostly residential, and it encourages cut throughs and traffic backups.  Moving that westbound access to the more commercial First street makes a lot of sense. 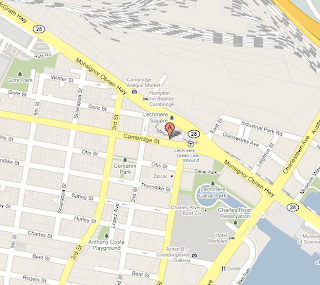 The state or MBTA did a land swap with a private developer to get the land on the other side of the highway, and the plan is to raze the old station.  The neighborhood association is lobbying to preserve the station and turn it into a farmer's market space,  which is appealing, but I'm not sure how successful they're going to be.  The best hope is to get the city of Cambridge declare it "historic"  but they don't seem to be interested so far, although the state and national historic folks are interested in preserving it.  The rest of the site will definitely be developed.

Next we walked over to the north side of the highway to check out the new station location.  Currently it seems like the location is not optimized for all the pedestrian traffic which is going to come from east cambridge- you will have to walk way out of your way around a private parking lot to get there (or more realistically, most people will just walk through the parking lot, but it's not an idea situation.  Ideally they'd do another land swap, or emmanent domain to get access directly from the first street intersection to the station.   next the train passes very closely to a condo building, a hotel and the Cambridge Antiques mall (home of Cambridge Used bicycles!).  This is going to be a mixed blessing these buildings, especially the condos and hotel.  On one hand, they'll have fantastic access to the T.   On the other, they'll have train lines running right past bedrooms, 20' feet away.   There was always a railroad right of way there, and the commuter rail tracks are not much further away, but it's still not going to be a great situation-noise wise.


We took a quick detour to check out the park/ MUP greenway that's being developed as part of the "campus" of commercial and residential buildings that are planned for that area just north of here.  Called  "North Point"  This area is planned to be a very dense urban neighborhood, reclaimed from brownfields/ old warehouses.

From here we headed back down along rte 28.  On major issue is that advocates see the possibility of reducing the number of lanes on 28.  It's 3 lanes each way typically, 4 lanes at intersections,  which makes it really tough to cross as a pedestrian.  The state wants to widen it in a couple of places to 5 lanes each way to add a left turn lane,   I think that's absolutely absurd,  because I've NEVER seen it full.  Evidently the traffic counts went down when the big dig was completed,  and the whole point of the green line extension is to parallel rte 28 and provide an alternative to driving into the city.  We need to push back on this in the planning process to keep the planners honest about traffic counts. 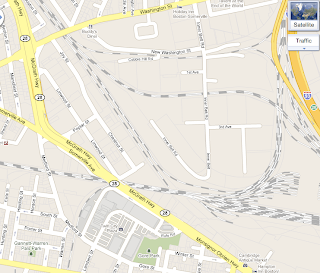 We then discussed the train at the Brick Bottom artist's lofts.   This building used to be a warehouse for A&P,  and was converted to live- work spaces 20 years ago.   Again, they kind of bought into a gritty urban setting right next to railway tracks,  but they're a bit worried about the new situation, which calls for a double stack of elevated and at grade lines on both sides of their building, which admittedly is pretty tough to take.  They're trying to change one of the elevated portions to get it a little further away and preserve a fire lane along one side of the building.

From here, we walked up across the (incredibly unfriendly) bridge which goes behind the "twin lakes" shopping market (where the Star Market is)  I actually saw a biker up on the roadway here- pretty tough going in traffic,  I tried to get a photo, but he was gone before I could get him
The pedestrian way is about 3' wide, with a concrete and chainlink barrier on one side and a steel plate girder barrier on the other.  not a great place for a stroll.
We checked out the location for the first stop on the medford branch of the line, at Washington street,  where it seems likely that they'll get it right,  building the station on top of the overpass over Washington street,  with access to all four directions that way.   I saw probably 6-10 bikers going along washington street while we were talking.  and it's not a particularly bike friendly area,  I think it's just the only connection point under the rail line. 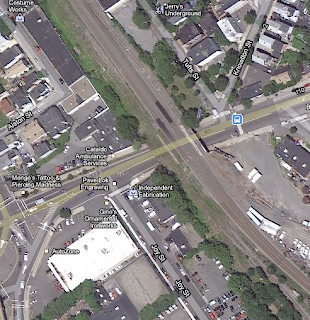 Here we turned around and headed towards union square, under the part of the  rte 28 overpass which is badly deteriorated and which will almost certainly be "de-elevated"   The state originally just wanted to rebuild it in kind, but the city of Somerville really sees it as blight and is pushing to bring it back to grade.
We didn't discuss where the Union square station will be, but headed back along the south side of the highway to our starting point.

A piece of it that I don't completely understand is the community path.  There were a couple of people attending who were advocates for the path, which is envisioned as a connection between Davis and the minuteman and downtown.  Evidently it's all funded and sanctioned, except the tricky tricky connection at Brick bottom, where no one wants to touch the hot potato of forcing a bike-ped path though a tricky train connection.  They, and advocates in general need to keep the pressure on the state to not drop the ball here, because a path that drops out at the critical connections isn't the kind of functional infrastructure we need.

Finally there was some interesting discussion of the Grand Junction connection.  There is an existing rail right of way (which is in limited use for freight) that goes across the Charles at the BU bridge,  cuts through Kendall square, and connects to North Station along the Rt 28 corridor.  The Lt. Governor is pushing creation of a new commuter rail service (heavy diesel trains) from Worchester in the west to North station using this line.  There's currently commuter service from Worchester to South station,  and I don't know what the demand is for connection to North station.   What  is insteresting about the idea is the possibility it has raised for light rail along those tracks- connecting Brookline and possibly even Longwood medical center to MIT, East Cambridge and East Somerville.   This is a real gap in the existing regional transportation network, and one of the reasons that the BU bridge is such a flashpoint- Cars and bikes are one of the only ways to get between those areas.   The idea of re-activating those tracks as Light rail instead of heavy diesel is really appealing to a lot of transit advocates.


Ok sorry for the long and technical report.  Some sites with more information: