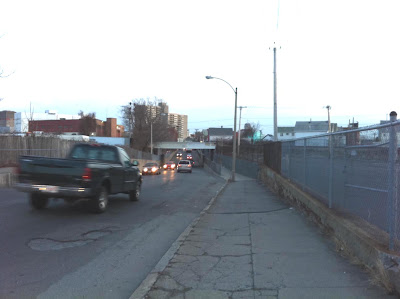 The closest Target to my house is on the East Cambridge/Somerville line, in a kind of gritty neighborhood full of auto body shops,  old warehouses, and other light industry.
The commuter rail tracks into North Station cut across the neighborhood,  and since there aren’t any on-grade crossings that I know of,  it limits access to a couple of choke points where there are tunnels or overpasses.    I mostly come this way to get to Target, Market Basket,  Autozone, or various restaurants in Union square,  and none of the ways to get there are fantastically bike friendly.
The tunnel above is the way I usually go though-  for one thing it’s the least out of my way, being the most easterly.   The main reason though,  is that despite the icky highwayesque crash barriers,  chain link fence and generally forbidding design it’s actually not particularly unpleasant to bike on.  The main reason is that the lanes are super wide- I’d guess 15’ each way.  They may have thought they could get 4 lanes in at one point, but the traffic volume doesn’t require that, so it’s one of the few places in Boston where there’s plenty of space to share the lane.
It’s the kind of place, however, that doesn’t “feel safe” for a newer biker, and I’ll admit that more than once I took the (narrow and really badly paved) pedestrian sidewalk, before I took the plunge and shot the rapids.
All this is a lead into a notice that there’s a lot of change possibly coming to this neighborhood in East Somerville.   The McGrath highway that is an elevated (and oversized)  throughway that  is another barrier across this neighborhood is crumbling and will need to be replaced or maybe returned to grade.  There’s potential for a greenway connecting from North Station to Medford,  and  the long delayed green line extension is part of the mix.
There’s an introductory site walk talking about the issues,  hosted by Cambridge and Somerville planning folks.    It starts at 10AM tomorrow April 2nd,  at the Dunkin’ Donuts at 3rd street and Msg O’Brian (across from Cambridge Used bikes)
The walk will probably take a couple of hours, and it’s going to be a bit chilly,  but I think it will be very interesting, and has potential to create better connections between these neighborhoods- ones that don’t require feeling like you’re shooting rapids just to get across.
Posted by cycler at 2:41 PM