The lovely weather is bringing out bikers right and left. 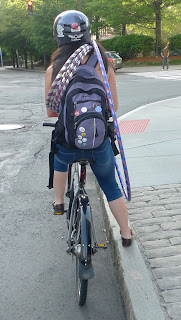 The first thing I noticed about this rider was the sparkly hula hoops that she had slung across her body.
The next was her enormous smile-  a smile that took over her whole face (even though she was squinting into the sun) 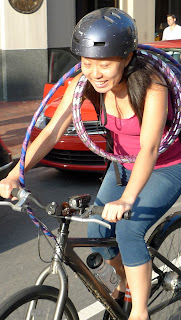 We chatted a bit at a light, and she said that she was off to a meetup of hoop dancers in Cambridge Common.  I wished I hadn't had to go to my livable streets meeting so that I could have followed her there to check it out.  Hoop dancing on youtube,

Speaking of Youtube, bikes and dancing,  I really loved the People For Bikes video that's been going round the blogosphere- especially the BMX trick guys.  This prompted a Youtube search which resulted in the most amazing bike video I have ever seen.   Wikipedia says that  Danny MacAskill  is perhaps the world's most renowned practitioner of what in the UK is called trials biking.  To me it looks like parkour or dancing on a bike.  It's incredibly amazing and terrifying, and he's an amazing athlete- absolutely one with his bike.  It's a bit long, but worthwhile!