As I've said before, it's fairly easy to ride in most skirts,  with the occasional pencil skirt exception.
I do have a couple of skirts that are not decent without opaque tights.  They're mostly shirt dresses where the last button is higher than the hem.  In the summer when opaque tights are both hot and odd looking, I do resort to wearing shorts under those few skirts. 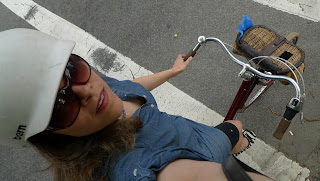 I have a couple of pair of just above the knee mostly cotton "workout shorts"  that I bought a couple of years ago at a big box sports store.   I should go back and see if  I can pick up a few more pair, because I also end up using them as painting clothes, and they're getting a lot of "character". 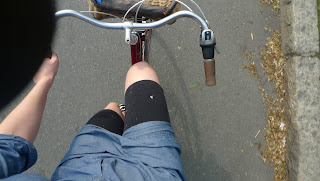 These do have a gusset,  but are unpadded, and mostly cotton with just enough stretch to stay put, not enough to feel sausage-like  I have tried riding with shorter, less form fitting shorts under skirts, but they tend to ride up too,  and even though I am not technically flashing anyone anything other than my shorts,  it doesn't look that way to the casual viewer,  and I don't care to think about the intent viewer!
Posted by cycler at 12:29 PM