I took my bike into Harris Friday and ended up at work without a bike on a lovely afternoon.
I decided to call my Mom for a little pre- Mother's day chat,  and walk towards the river, with the intention of catching the red line from Charles street.
An hour and a half later, I was home, having decided to walk the whole way since it was so lovely.
And since I was on foot, I had lots of chances to check out the bikes parked along the way- and I saw some great ones:


This green bike was a great color with nice bones, given charm with sparkly saddle and matching grips.
The owner came out of Kinko's while I was checking it out, and was relieved to recognize me from bike-y events (instead of a stranger casing her bike).  She introduced herself as C, and told me that she'd bought it in NYC,  and that it was no particular brand, but that it got her around just fine.
Which after all is what they're for. 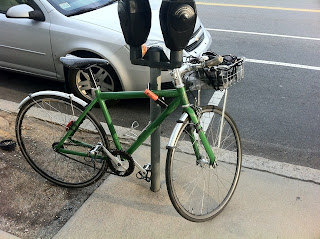 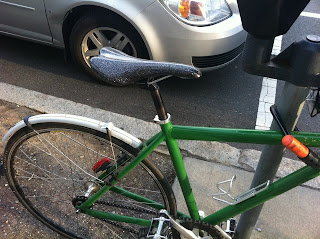 Slightly further down I found this "Porteur" style bike.
What I liked about this bike was that it hit all the Porteur notes with inexpensive and widely available standard parts.  The frame was a Trek, but one with decent lugs  and it looked like it had been powder coated cream. 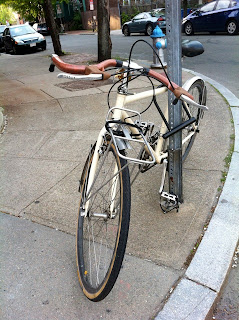 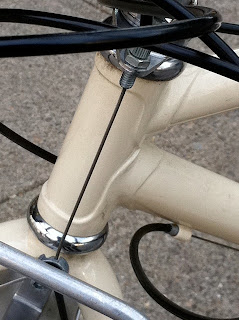 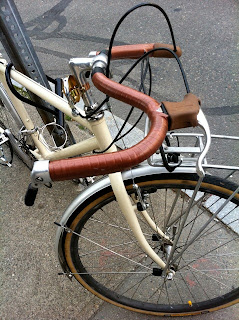 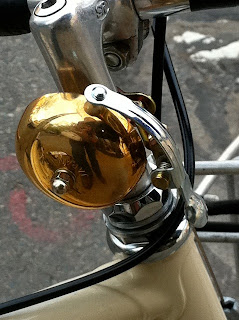 I really like how regular parts and a good eye for detail create a really distinctive looking bike on a budget.
At the racks outside of 1369 there were a ton of bikes (as always).
This one looked like an art project (or an attempt to use up extra paint) to personalize an otherwise unexceptional ride. 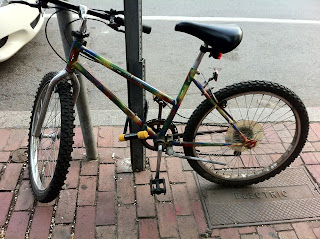 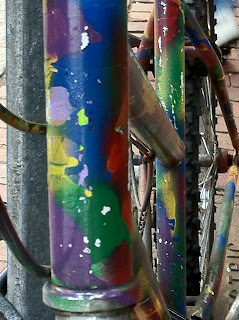 The stars of the rack were a pair of Surlys (I wonder if they were together or not?)  which had been taken in very different directions.  The first was a Big Dummy: 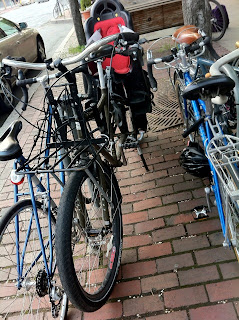 I've seen a couple of Xtracycles around, but I think this is my first Big Dummy.  And boy is it big.  The tires are enormous!  And this one is fully kitted out as kid carrier and grocery getter extraordinare. 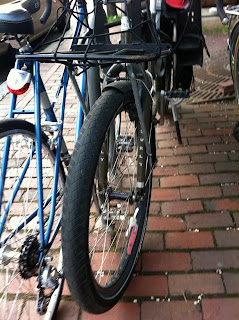 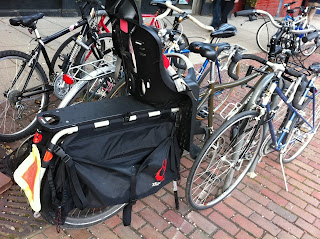 The other Surly was taken in a much more refined direction, complete with Brooks saddle, Honjo fenders, cloth taped and twined bars, and yes, another threadless stem mounted bell.  Have I just been missing these bikes all along, or is this a new trend? 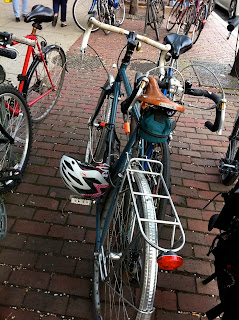 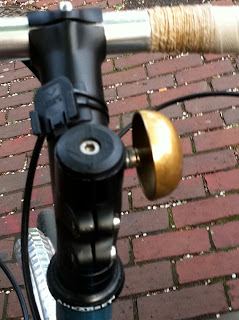 This next bike isn't lovely in any way, but I was intrigued by the "Dawes" label.  I think of Dawes as being one of the great European touring bike companies, so I was really confused by what basically looked like a BSO. 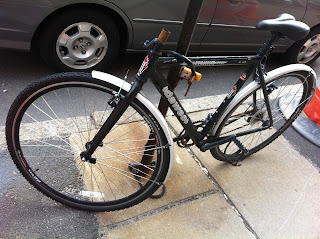 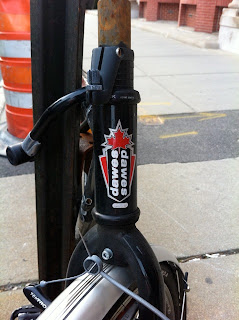 Wikipedia informed me later that yes, Dawes Cycles specializes in handmade touring bikes,  but that there is also a Dawes USA which is not affiliated in any way.  Gosh, I hope not!  Kind of confusing to have the same name.. 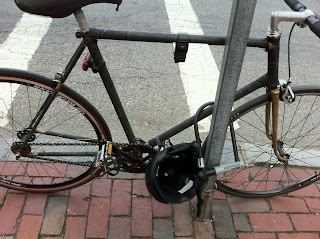 From across the street I wondered if this next bike was bamboo- but the tubing seemed too small.  That's because it was an old Gold frame wrapped almost completely in black gaffers tape.  It does have quite a distinctive texture, and you wouldn't have to worry about chipping the paint! 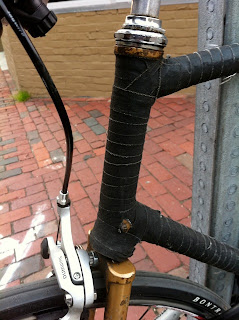 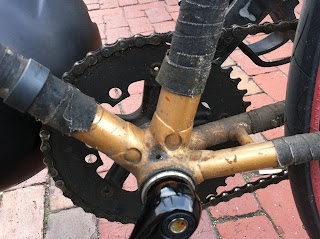 Finally a semi-generic fixie had a really cool lock in silver.   Which makes me think that the lock manufacturers are really missing an opportunity here. They could probably sell a lot of locks in hot pink, green, yellow etc.  They're not thinking about locks as anything other than function, but there are a lot of people out there who might just buy a fun colored lock.  The other cool thing that only looked semi-functional,  is what look like leather cable retainers (?)  Also,  I know that Knog light fixtures are really cool looking, but I don't really hold them as real bike lights- they're just not bright enough. 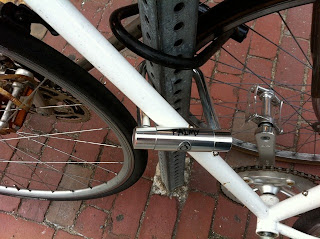 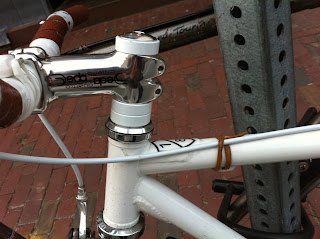