Signage worth a second look

The NYDOT has sponsored an artist to develop some visually and intellectually arresting signage PSA's  in Haiku form, which are being posted at a number of intersections throughout the city. 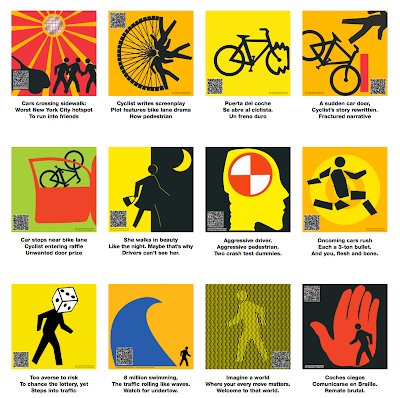 On one hand the visual style is really interesting, and the haiku format is both concise and attention grabbing.  More information, like the fact that the campaign is being paid for by traffic fines here.

Perhaps I'm biased, but it seems like there's an undertow of blaming the victim- the "door prize" and the "cars crossing sidewalk" ones particularly.   If you're on the sidewalk, doesn't it seem like you should be able to stop and talk to friends without worrying about being hit by a car?    And the Car stops near bike lane one seems to imply that the cyclist by "entering the raffle" is to blame.

I also don't know how cyclists and drivers (at whom at least some of these are, or should be aimed) will see the signage if it's only posted at street crossings.  Hopefully they'll be part of a wider PSA campaign to reach all modes, not just people on sidewalks.
Posted by cycler at 6:34 PM