A Visit to Newton

While Gilbert was at Harris for his pedal problems, I took a quick detour to visit Vee,  of the blog Suburban Bike Mama.  She made me some much needed coffee in her charming kitchen, while her cat flirted with me.   Then we headed out to let me try her new bikes.  I was especially interested in trying the electric assist Christiana trike that she got this fall. 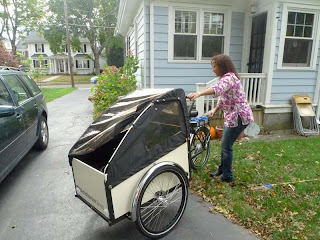 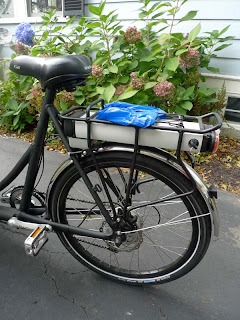 The battery pack is nicely integrated with the rear rack, and you can barely see the motor-axle. 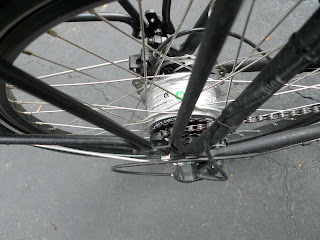 The steering motion was very odd to me because you simultaneously have to push the handlebar out with the "outside" arm while leaning inward.  I suppose you could just turn one handed if you were more comfortable with it, but it was very counterintuitive on an initial test ride.

The motor was pretty awesome though.  There's a very steep hill at the end of her road,  and it would be a challenge for an unloaded bike, let alone with a couple of kids or a big load of groceries.   The motor made it really quite manageable, and after the first "whoa" when I first kicked in the assist, it felt very natural and intuitive how to use it.
I also took a quick spin on her new bright orange Public. 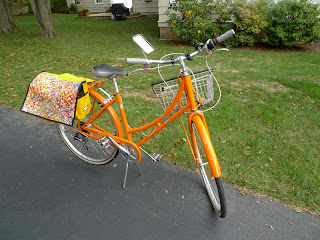 Maybe it was because we didn't bother to adjust the seat, but the geometry wasn't quite comfortable for me.  Partly I'm used to more backward sweep on the handlebars. I guess I would describe it  as if the center of gravity was too far forward. Not in the same "cruising" way that dutch bikes have, but in a twitchier sort of way.   I suppose that if I rode it regularly and adjusted it properly for me, it would start feeling natural. 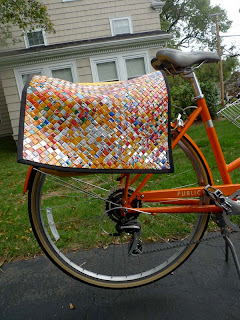 The bike is perfectly accessorized with a bag made of woven juice boxes- very cool and the perfect amount of orange to coordinate without overwhelming.

One of the neat accessories that Public offers is a neat spring-loaded basket which will fit on either the front or the rear rack,  and which is quickly removable by pulling out the side stays, which are held against the rack tubing by the spring tension. 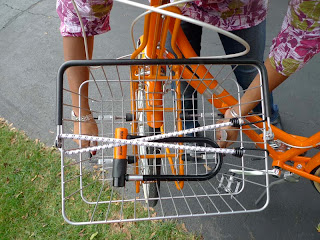 There were two "detents" for the different tube thicknesses at front and rear racks,  and I think the basket would be more secure on the rear rack with its larger tubing. I'm not generally a big fan of the look of wire baskets (it's the retrogrouch in me)  but the design of this one was very clever, and could not have easily been done in wicker or wood.

And with that,  Vee's kids and husband arrived home, and I had to go pick up Gilbert from his "pedalicure"  It was great to get a chance to catch up with her, and see her unique bikes!