Something to be thankful about

Now that it's "official"  I want to introduce the newest member of my bike herd- the as yet unnamed lovely touring Shogun: 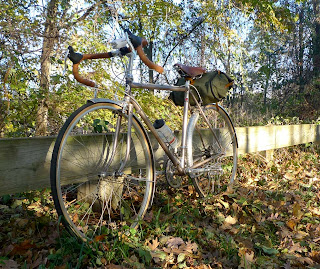 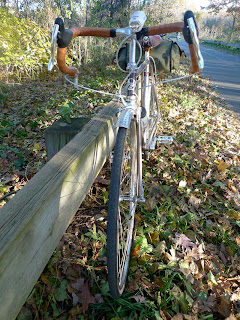 The Scientist and I have long had dreams of relaxed touring trips through western mass, or the south of France, but it didn't seem that I had the bike for it.   While I'd ridden Gilbert up to 70 miles in a day, with no ill effects, it didn't seem like the best way to cover serious ground.   I was not comfortable enough riding my old Trek "sports-touring" bike to be willing to embark on the project of  converting it into a stylish "touring" bike (something that I fear would be a bit of a hack job),  and was striking out on craiglist. 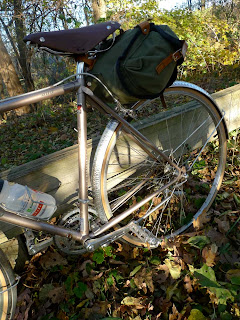 So I'm extremely excited to add the Shogun to my collection of bikes, and have been taking advantage of the mild November here to take some nice long rides.  So far, I've mostly been riding to, and then along the Minuteman, so that I could get acquainted without having to deal with much traffic. 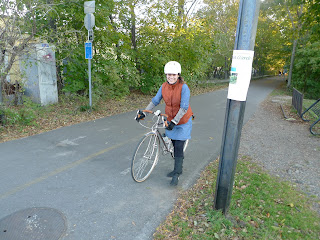 Unfortunately on the first test ride, before I learned that I would get to keep it,  I wiped out- something I haven't done on a city bike ever.  This was not a promising introduction to riding a "road" bike!  I was perhaps pushing the speed a bit too much, and was going to pass a pedestrian, when I realized that I didn't have enough space from oncoming traffic to pass safely.  I hit the brakes, but was unfortunately on a patch of loose pine needles and leaves, and the rear tire slid sideways, and I pitched forward onto my head and shoulder.  I was very glad I was wearing a helmet, because I pretty much landed on my forehead.   Fortunately the only real injury, besides some bruises and scuffs to the leather bar tape, was the front derailleur got twisted around 20 degrees, which was fixable with 30 seconds and a multi-tool.  I got back on, and felt like I was still comfortable riding.   It didn't hurt that being on the path meant that I had another hour of mostly traffic-free riding to get over the shock.

Although the bar end shifters are easier to use than the down tube ones on the Trek,  I'm not 100% there on the friction shifting.   It sounds stupid if you're used to it, but I keep forgetting which way is "up"  and downshifting when I mean to upshift or vice versa.   I've found though that I don't need to freak out- if I mess up the shifting, it doesn't do great things for my momentum, but I can generally fix it without too much trouble. 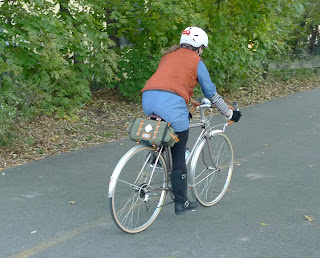 The 10 cm stem does stretch me out a bit further than at first I thought I would be comfortable with.  I talked to Velouria about the advantages and disadvantages of a longer stem,  and decided to leave it for now, as a shorter stem might make it feel more flighty, which is the last thing I want.  I think that for now, it's the right decision, as after only 3 or 4 rides, it's feeling much more comfortable, and more like the accommodations I make switching between Minerva and Gilbert, in that it takes a few minutes to get used to it, and then I'm OK.

Possibly because my legs are used to pushing around 40+ pounds of lugged-step-through-goodness, the bike both feels super light (although Velouria told me she thought it was a little pudgy- that's what you get from riding titanium bikes!)  and is super easy to pedal. It's most noticeable on hills, which I feel like I'm flying up- almost like I have a motor assist!  On the flats, I feel like the gearing is maybe a bit low, but interestingly, after a couple of rides that I've decided that that makes me feel more comfortable on the bike, not less.   It's kind of a reminder to relax a bit, not always push things.   And it's plenty fast, even if I'm not maxing out my effort.  I think that it will be perfect for putting a small load on the bike and riding all day.

I  found that even after a few rides, and despite my spill, I'm comfortable enough on this bike that in a fit of new-bike delirium,  I even rode it downtown after dark,  riding through Central square on Mass Ave even- something I'd never be comfortable doing on the Trek, because it's so unstable feeling.   I even rode it to work one day,  mostly because I needed to take the Scientist's car in for an oil change (yes, despite the fact that I rarely drive it,  I take charge of the care and feeding of our family car) and it occurred to me that I could take the front wheel off the Shogun using quick release, unlike my city bikes, and thus stow it in the back for the drive to the garage.    On the ride in from the garage, there were some guys from Boston Adventours doing a little tire pump and brake adjustment "mini-clinic"  at Charles Circle,  and they were all over it, admiring the VO crankset and the fenders.

I've been spending a lot of time admiring it too.  Until it finds a proper home, it's sitting in my dining room, and I have been known to spend many minutes just staring at the lovely color and perfectly suited appointments!  I will probably add a small VO rack at some point for touring, but the Carradice saddle bag has been surprisingly capacious.  I managed to stop at both Penzey's, and Trader Joe's on my last trip out the Minuteman, and on the first, there was space for a lock, a patch kit, a small pump, a small camera, and reading material for two. 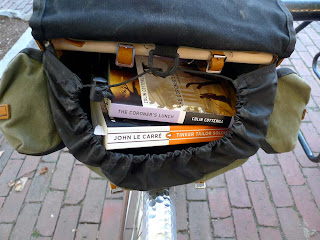 Despite the unseasonably warm temperatures, I've not been able to take as many long rides as I'd like, due to sickness, Thanksgiving travel, and an unexpected slow flat (fortunately on the front).  I'm hoping to get a couple more long rides before the snow arrives, does anyone have suggestions for nice low-car rides of 20-30 miles or so in the Boston area?
Thanks again to Velouria of Lovely Bicycle, and I hope to be able to reward her and her sponsors, Harris Cyclery, Velo Orange, and Cambridge Bicycle, and donors, Spindizzy,  Justine Valinotti, G.E., Neighbortease, Cedar and Somervillain with lots of stories of adventures we take together!
Posted by cycler at 8:55 PM