After seeing bike corrals pop up in Somerville (in Davis and Union)  I wondered when Cambridge, once the bike-infrastructure leader of the region was going to catch up!   Fortunately it didn't take too long, and I've seen two bike corrals so far- one on Broadway, right in front of Broadway Bikes, and one on Third Street, right at the corner of Broadway.  The Scientist said he saw another one on 3rd, right next to Voltage Coffee.  I'm sure they must be popping up all over.  When I swung by the one at Broadway bikes, the guys reluctantly answered the door (they had just closed)  to tell me that they'd just gone in at the end of last week.

Anyone else have sightings to report?   I'd vote for one at Area IV and one at Green Street Grill.  Green Street especially has a dearth of poles and other stuff to lock to, so it would be a big help.  I know that the owner of Green Street is a big bicyclist, so I would hope he'd approve.   I think that technically there is no parking along there as it's a fire lane though, so it might be hard to get approved. 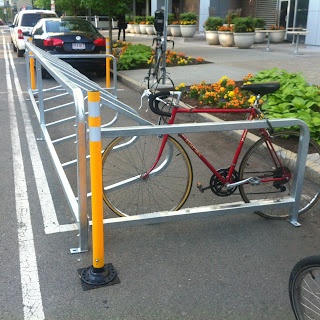 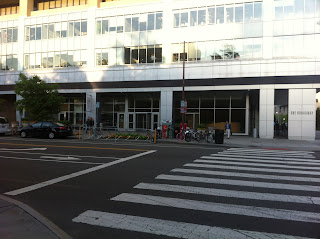