After all the rain and wind and mucky humidity last week, Saturday dawned clear and cool.
I met with my group in Arlington Center at 10 at the mouth of the main section of the minuteman trail, and after a brief stop for caffeinated beverages and pastries, we headed off.
The minuteman trail is really a wonderful thing.  Although it was fairly crowded,  it's much much easier to ride as a group and have conversations with your companions when you can ride two abreast.

After we left the bike trail, we continued for about an hour and a half (maybe a bit more) on busy country roads.   I've gotten accustomed to traffic on city streets, but it's still unnerving for me to be riding on a tiny shoulder while cars race by at 50 MPH.  Most cars were actually pretty good about passing with half a lane of space, and it got better as I got used to it,  but I was glad to be in a group, and there were still a couple of moments where my heart was in my mouth.
Three of our group were pretty hard core long distance cyclists, and three of us were not.  The long distance people did a good job of trying to slow their pace for us who were on more commuting bikes,  but it was definitely a struggle for them to remember to slow, and a struggle for us to keep up.

I was reasonably comfortable the whole time though- I could more or less keep up without too much strain,  and the albatross bars were absolutely fine-  I actually had much less shoulder and neck pain than I have had in the past riding long distances with road bars.  I think that being able to straighten up, holding the bars by their very ends let me stretch my neck and shoulders so that I was really quite comfortable.  I  wore unpadded "workout shorts"  which are cotton with just enough lycra for stretch,  and knee length, under a smock like cotton dress.  I didn't have any chafing issues although I was tired of sitting on the saddle by the end of it.
I did notice a pain in my knee, which got worse on the ride home, and I am quite sore in that knee this morning,  but it's getting better as I walk around and loosen up.

We stopped just shy of Nashoba valley winery (where we were picking) to grab some lunch at a less crowded venue,  and I took some detailed shots of one of the bikes in the group- the owner had constructed a home-made dual LED headlight that ran off his generator front wheel.  Very cool.  Of course he had built the bike himself (!)  so making his own light is probably a lesser feat,  but I was very impressed with both. 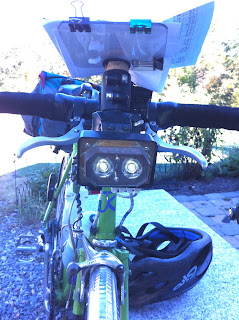 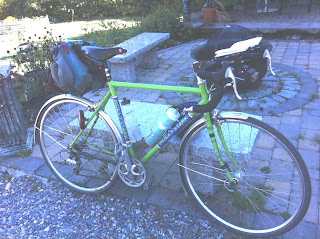 At the winery/ orchard,  we met a group who had arrived by car.  We wandered around the orchards to find a couple of types of apples.  It was such lovely weather- cool, sunny- perfect fall weather for such a fall activity. 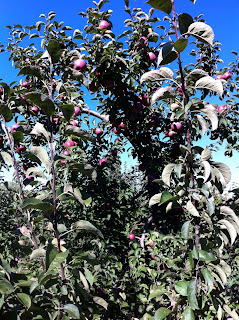 Loaded up with 10 pounds of apples and a couple of bottles of hard apple cider in a single pannier,  Gilbert was a bit unbalanced,  but fortunately the ride home was a net elevation loss. 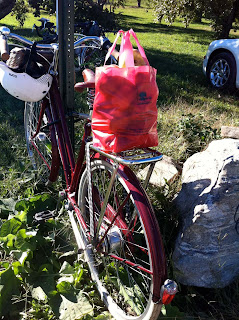 The slowest member of our party elected to ride home with one of the carloads,  so I do think we made a bit better time back.  We stopped in Lexington at the Ride Cafe,  which I had heard about but never visited.  It's a combination of very high end bike shop (Seven, Cervelo, and Public bikes, Rapha clothes)  and coffee bar.  Coffee was very welcome by this point (about 6:00pm)   By the time we headed back for the last leg home it was getting quite chilly and was almost dark.  I was glad that the dress (smock really) that I had worn over my bike shorts had long sleeves that I could roll down to keep a little warmer.
Home just in the nick of time, I met with my neighbors about their house rennovations, made some comfort cauliflower , canned a batch of marinated roasted peppers  ( I had roasted them in the morning before the ride, and just had to peel them, stuff them in jars, top them with vinegar and spices and process them for 10 minutes).  I fell into bed around 10, and was asleep not long after, dreaming of tarte tatin!
Posted by cycler at 12:34 PM