O Ye who are heavy laden

I've been listening to the Messiah at work, so excuse the slightly biblical title.
Generally every couple of weeks, I borrow the Scientist's car and do a run to the mainstream grocery store for big bulky things like dog food, soda, paper towels etc.
I can do these things by bike, but only a couple of things at a time.
It's been a while since I had one of those weekends, and the dog was down to sorrowful scrapings of the bottom of the bin.  So I headed to the big grocery store and loaded up my cart:  20lbs of dogfood,  two 6 packs of soda, a loaf of bread, two pounds of chicken thighs,  cilantro, ginger, and a 3 pack of gladware.
What it looked like in the carriage: 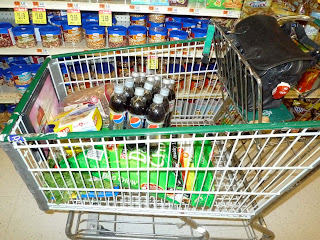 What it looked like loaded up on Gilbert:  Can I put in another plug for how fantastic flat rack straps are?  This would not have been possible without them: 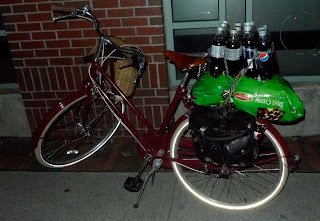 Now 99% of people would be content to wobble home, but I decided that there were a couple of things I also needed from Trader Joe's.  So I slowly biked down to the river, and picked up some capers, cotija cheese and coconut milk (all the C's) Finally, I headed down the river bike path, I was not terribly stable, but it was fine.
Posted by cycler at 9:42 PM